Hamburgh Breed Chickens from The Practical Poultry Keeper by Lewis Wright 1867. Colour Illustrations by Ludlow from the 1899 Revised Edition. 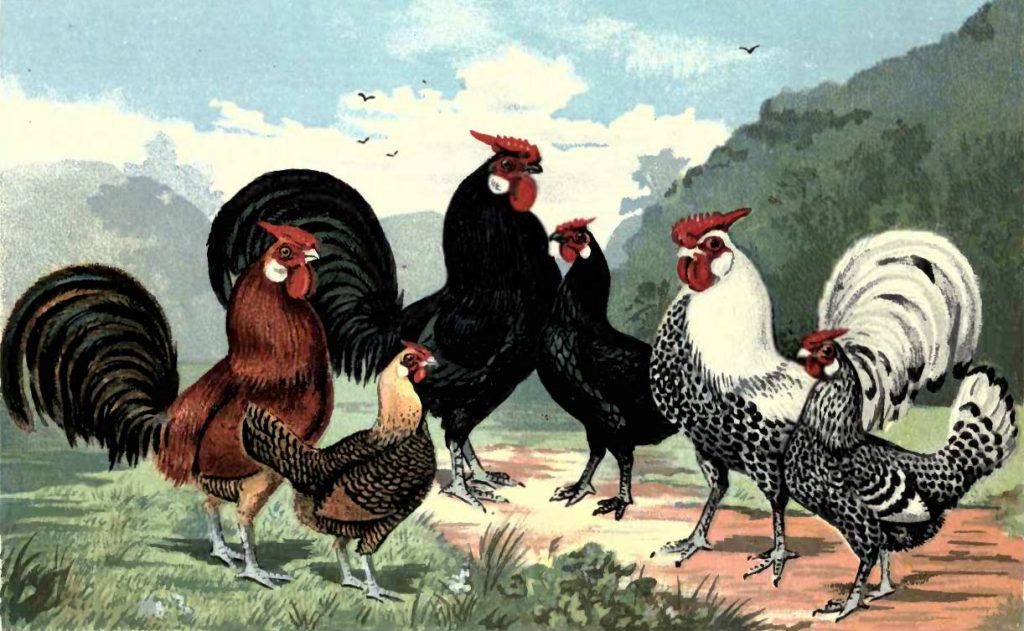 UNDER the name of Hamburghs are now collected several varieties of fowls, presenting the general characteristics of rather small size, brilliant rose combs, ending in a spike behind, projecting upwards, blue legs, and beautiful plumage.

None of the Hamburghs ever show any disposition to sit, except very rarely in a state of great freedom ; but lay nearly every day all through the year, except during the moulting season.

SILVER-PENCILLED. The size of this exquisite breed is small, but the shape of both cock and hen peculiarly graceful and sprightly. Carriage of the cock very conceited, the tail being borne high, and carried in a graceful arch.

GOLDEN-PENCILLED. The form of this breed is the same as the preceding variety, and the black markings are generally similar, only grounded upon a rich golden bay colour instead of a pure white. The cock’s tail should be black, the sickles and side feathers edged with bronze; but tails bronzed all over are often seen. The colour of the cock is always much darker than that of the hen, generally approaching a rich chestnut.

GOLDEN-SPANGLED. Whilst the markings on pencilled Hamburghs consist of parallel bars across the feathers, the varieties we are now to consider vary fundamentally in having only one black mark at the end of each feather, forming the “spangle.”

This black marking varies in shape, and though only one variety is recognised in each colour at poultry exhibitions, it is quite certain that both in gold and silver there were two distinct reeds, distinguished by the shape of the spangle.

The best known of the two varieties, and the most often seen, was the breed long known in Lancashire under the name of “Mooneys,” from the spangles being round, or moon-shaped. The ground colour of the pure golden “Mooney” Hamburghs was a rich golden bay, each of the feathers having a large circle, or moon, of rich black, with a glossy green reflection.

The second variety was known chiefly in Yorkshire as “Pheasant fowls,” and differed greatly in the plumage. Instead of the spangles being round, as in the “Mooneys,” they were crescent-shaped, approaching the character of lacing ; the marking was also seldom so sharp and definite, being often a little “mossed.”

In the cock the crescent spangles on the breast ran so much up the sides of the feathers as really to bec’bme almost a lacing. But the ears were white, and the cocks had much smarter and neater combs.

The present Gold-spangled cock has a jet green-black tail, and is spangled as regularly as possible, especially in regard to two bars of spots across the wing. Some birds, almost too dark for exhibition, if good in head, breed excellent pullets.

SILVER-SPANGLED. In this class two similar varieties existed. The Lancashire silver “Mooney,” with large round spangles, resembled the golden, substituting a silvery white ground colour. The outside tail feathers in the hen, however, differed from the golden Mooney, being silvery white, with only black moons at the tips.

BLACK HAMBURGHS. There is much doubt about the real origin of this fowl. Many think it was first produced by crossing Silver-spangled with Spanish ; and the frequent signs of white round the eye, the smooth lobe, and the larger egg, are strong arguments for this ; also many birds used to be seen with a sort of spangle of extra iridescence on the ends of the feathers. The greater size and darker legs are also quoted.

But old fanciers affirm that the breed was known generations ago, and that all green, free from spangle, was the correct colour. Our own opinion is for the Spanish cross ; but it has been long bred out in all but the whitish face, which still appears occasionally.

REDCAPS. There is occasionally met with in Lancashire and Yorkshire, under this name, a oarse, large sort of goldspangled bird, very irregular and poor in marking, and with immense combs often hanging over on one side. They may have been originally some kind of Hamburgh mongrel, and, while of no exhibition value, are the best layers of the whole race.

Hamburghs are in many circumstances a profitable breed. Except the Gold-spangled, which are all poor layers, they are good layers when a good strain is secured. Each hen will lay from 180 to 220 eggs in a year; and although these are generally small, the consumption of food is comparatively even more so.

Though naturally loving a wide range, there is no great difficulty in keeping them in confinement if cleanliness be attended to. If so, the number must be very limited : where six Brahmas would be kept, four Hamburghs are quite enough, and they must be kept dry and scrupulously clean.

Perhaps the Silver-spangled and Black are best adapted for such circumstances. With a good egg-market near, the Redcap is one of the most profitable fowls a farmer can have. The pencilled birds are, as already remarked, most certainly delicate, being very liable to croup if exposed to cold or wet ; they should not, therefore, be hatched before May.

The spangled are hardy, and lay larger eggs than the pencilled ; but the latter lay rather the most in number. For profit, however, we should recommend the Black Hamburgh, on account of the large size of the eggs ; and some strains of this variety are certainly most extraordinary egg-producers.

Hamburghs are too small to figure much on the table. They carry, however, from the smallness of the bones, rather more meat than might be expected, and what there is of it is of good quality and flavour.