Polish Breed Chickens from The Practical Poultry Keeper by Lewis Wright 1867. Colour Illustrations by Ludlow from the 1899 Revised Edition. 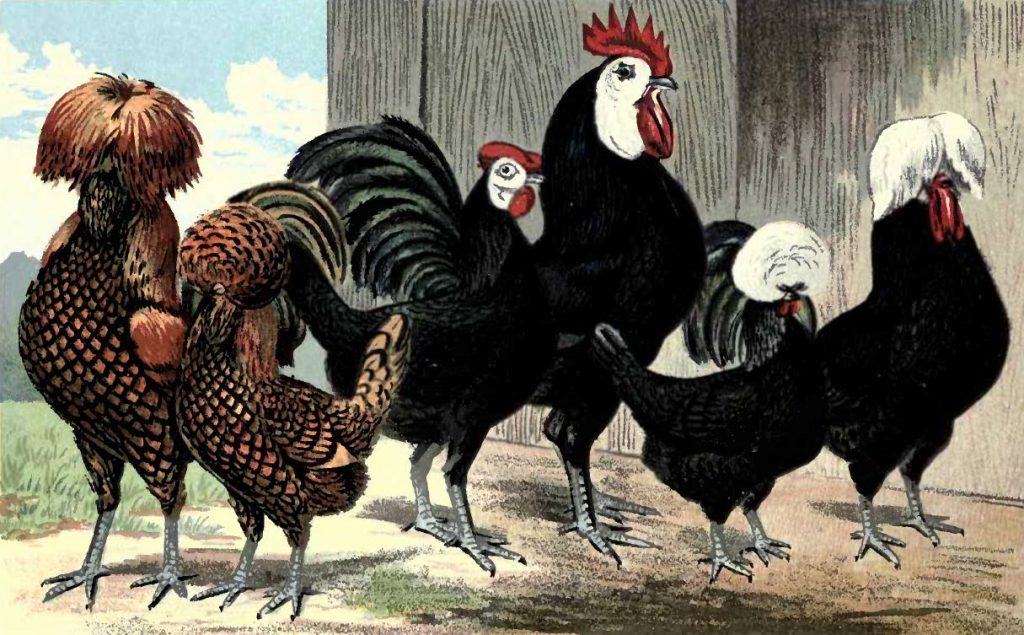 UNDER the title of Polands, or Polish fowls, should be collected all varieties which are distinguished by a well developed crest, or tuft of feathers on the top of the head. This crest invariably proceeds from a remarkable swelling or projection at the top of the skull, which contains a large portion of the brain ; and it is worthy of remark, that as the comparative size of this protuberance invariably corresponds with that of the crest springing from it, the best crested chickens can be selected even when first hatched.

It is also remarkable that the feathers in the crest of the cock resemble those of his neck hackles, being long and pointed, whilst those of the hen are shorter and round; and this difference forms the first means of distinguishing the sexes.

The comb of all Polish fowls is likewise peculiar, being of what is called the two-horned character. This formation is most plainly seen in the Crevecceurs, where the two horns are very conspicuous. In the breeds more specifically known as Polish the comb should be almost invisible, but what there is of it will always show a bifurcated formation.

WHITE-CRESTED BLACK. This is the most generally known of all the varieties. The carriage of the cock, as in all Polands, is graceful and bold, with the neck thrown rather back, towards the tail; body short, round, and plump; legs rather short, and in colour either black or leaden blue. There should be almost no comb, but full wattles of a bright red; ear-lobes a pure white.

Plumage black all over the body, with bright reflections on the hackle, saddle, and tail. Crest large, regular, and full, even in the centre, and each feather in a perfect bird we suppose of a pure white; but there are always a few black feathers in front, and no bird is therefore to be disqualified on that account, though the fewer the better. Weight from 5 to 6 lb.

Hen very compact and plump in form. Plumage a deep rich black. Crest almost globular in shape, and in colour like the cock’s. We never yet saw a bird in whose crest there were not a few black feathers in front, and we doubt if such were ever bred. Where they do not appear, the crests have always been “trimmed,” and in no class does this practice so frequently call for the condemnation of the poultry judge. Weight of the hen 4 to 5 Ib. This variety is generally delicate and subject to croup.

BLACK-CRESTED WHITE. There is indisputable evidence that there once existed a breed of Black-crested White Polands ; but, unfortunately it is equally plain that the strain has been totally lost. Its disappearance is the more to be regretted, as it seems to have been not only the most ornamental, but the largest and most valuable of all the Polish varieties.

The hen described by Mr. Brent dwarfed even some Malay hens in the same yard.

WHITE-CRESTED WHITE. This breed, and those which follow, differ from the white-crested Black Polands not only in greater hardihood, but in having a well-developed beard under the chin, in lieu of wattles. They are large fine birds, and the crest is finer and more perfect than in most other colours.

They are also among the best in point of laying. The plumage needs no description, being pure white throughout. The variety, though not extinct, is, however, now very scarce and seldom seen.

SILVER-SPANGLED. In this variety the ground colour of the plumage is a silvery white. Formerly birds were shown with moon-shaped black spangles, and this was once considered correct; then for many years laced feathers have been the correct thing, except that the cock’s back shows some approach to spangling occasionally. The sharper and blacker the lacing is the better.

The cock’s sickles still show a broad tip or sort of spangle at the end, as well as the edging, and the ground is apt to be grey in these feathers, which dark colour, indeed, breeds better pullets. The lacing of his breast is very important for show purposes, many cocks being nearly black in the upper part.

During the last year or two we have occasionally seen birds with the round spangles again. The crests should be full and regular, not hollow in the middle, and the feathers here also are laced in hens and more tipped in the cocks. A few white feathers are apt to appear with age. The deaf-ears are small and white, wattles none, being replaced by a dark or spangled beard and whiskers. The size of this breed is very fair, the cocks weighing 6 to 7 lb., hens 4 to 5 lb.

GOLD-SPANGLED. This breed resembles the preceding in black markings, only substituting rich golden ground for the white.

BUFF or CHAMOIS POLISH resemble the Golden- spangled in the colour of the ground, but the spangles present the anomaly of being white instead of black. They were first produced, there can be no doubt, by crossing the Golden spangled with White birds, just as Piles were produced from Black-red Game.

At first these birds did not breed at all true, showing probably a recent cross; but of late some very fine importations have been made from the Continental shows, which may give this pretty marking a better chance.

These foreign specimens have been larger and finer than any we have seen bred in England. Blue, grey, and cuckoo or speckled Polish are occasionally shown, but are evidently either accidental occurrences, or the result of cross-breeding, and cannot be recommended even to the fancier.

All the Polish breeds are rather liable to grow up “hump-backed,” or ” lob-sided ” in the body. Of course either defect is a fatal disqualification.

Polish fowls have certainly solid merits. They improve in appearance, at least up to the third year. In a favourable locality they are most prolific layers, never wanting to sit, and the flesh is remarkably good. They appear also peculiarly susceptible of attachment to their feeders. And lastly, they suffer remarkably little in appearance or condition from exhibition or confinement.

Their great fault is a peculiar tendency to cold and croup the white-crested black variety being the most delicate of all. The dense crest becomes during a shower saturated with water, and the fowls are thus attacked in the most vital part.

No birds are so affected by bad weather. They can only be kept successfully in warm, genial situations, on welldrained ground, with a chalk or sand sub-soil, and with ample shelter to which they can resort during showers. In such circumstances they will do well, and repay the owners by an ample supply of eggs. Closely confined in a dry shed they also do well, if only kept rigidly clean and free from vermin.

Polish breeders should not seize their birds suddenly. The crest so obscures their vision that they are taken by surprise, and frequently so terrified as to die in the hand,. They should, therefore, always be first spoken to, or other made aware of their owner’s approach.