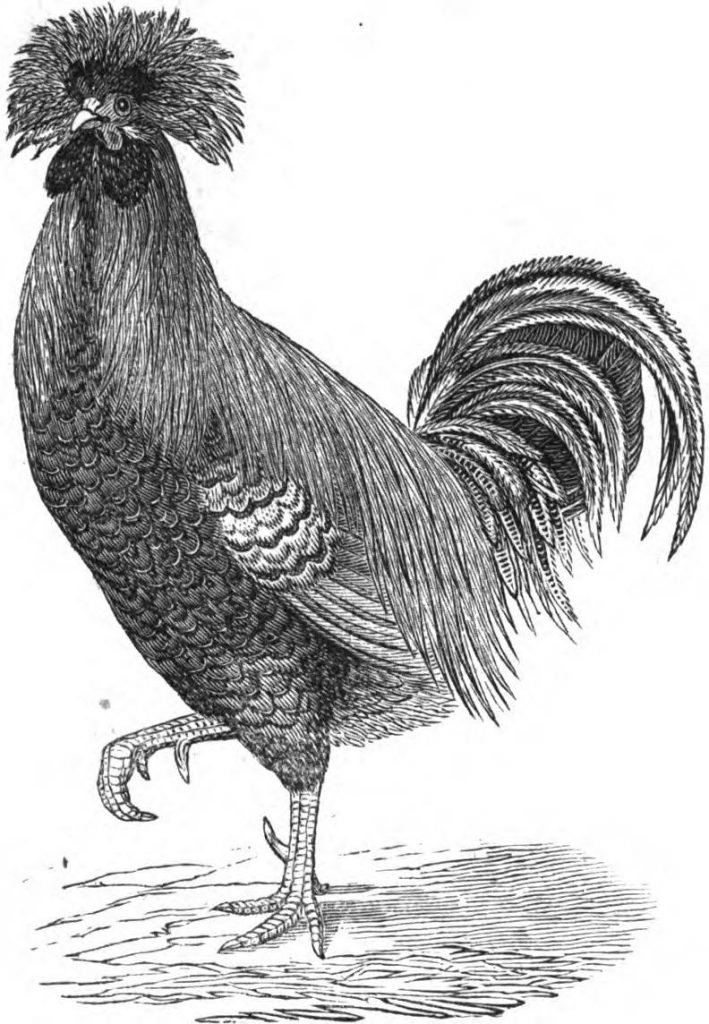 Which are, at present, very rare, and always very beautiful; when purely bred, they present the finest possible contrast of colours ground of the feathers bright orange, tipped with white, with an occasional sprinkling of green, black, and brown, with splendid white top-knot.

They cannot be described as having a comb, being so diminutive as scarcely to be called one; wattles small, top-knot beautifully white, hackles spangled, as the rest of the plumage, tail well plumed, legs blue, flesh white and delicate, eggs abundant, chickens easily reared.

The distinguishing characters from the Spangled Hamburgh are the white topknot, and the absence of the ruff under the beak, which cannot be wanted in a well-bred Hamburgh fowl.

Both cock and hen have a superior quiet elegance. I cannot say too much for their beauty. 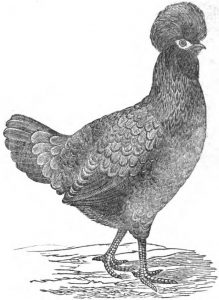 Another very beautiful variety of poultry, distinguishable from the preceding, by their large top-knot, being coloured instead of white, and their black and conspicuous ruff, on their throat and under their beak.

They approach so nearly to the preceding that they are frequently confounded with each other, and even bred together, as the same, which has caused the Hamburgh so frequently to show the white feathers in their top-knot, and the Spangled Polish the dark colouring in theirs; but still the ruff, at the throat, distinguishes the fowl

The chickens, though of the same clutch, sometimes have the ruff at the throat, and some of the same, maybe without it, but, as before described of the Dorking and Sussex, the breeders designate them Spangled Polish, if without the ruff, but Spangled Hamburgh if they happen to possess it.

Perfectly pure-bred birds, of either variety, are easily distinguished from the other, but most difficult to procure. The ground and colouring of the feathers differ as well as the ruff and topknot. 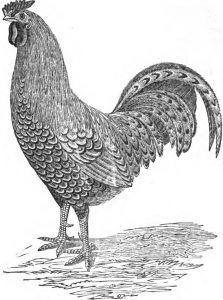 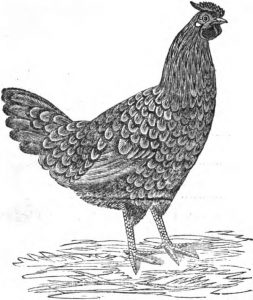 These birds, though bred carefully and distinctly as near us as Lancashire, Westmoreland, and Yorkshire, are but little known in Ireland. They take their name, not from any affinity to the true Pheasant, but from their beautiful markings, much resembling the brown Pheasant cock.

They are prized by the poultry fanciers for their elegant deportment, as well as superior markings, and poultry clubs are established in the principal towns, through the northern and midland counties of England, for their promotion.

The members of which are awarded premiums for breeding and rearing the best specimens, a standard being laid down by the club, as to the points of perfection and markings. Good specimens, even in the locality in which they are bred, from the encouragement given to them, bring high prices; indeed.

So much are they valued, in consequence of the spirit of competition, that some breeders would not part with their stock for any reasonable sum.

I have so frequently experienced the liberality of poultry-fanciers, and having had promises from the first keepers of them, I have always been able to procure fine specimens.

I have been told by a gentleman, who long resided in Russia, that they are common in that country, and some specimens are said to have come here, from that quarter.