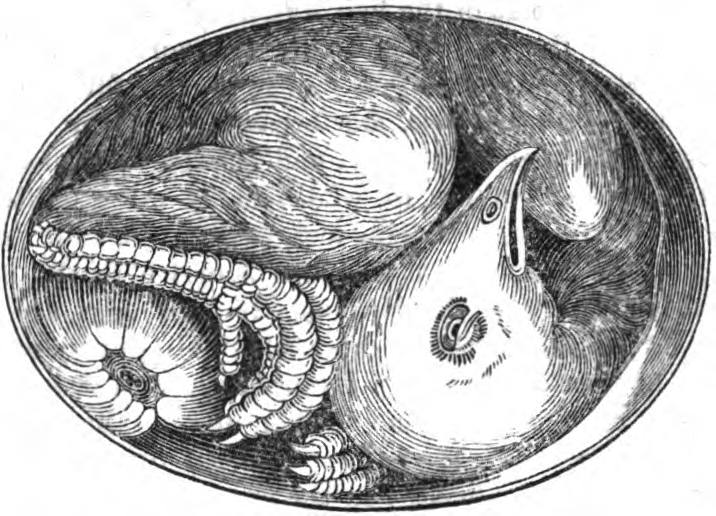 Chick in Egg from Nolan’s 1850 Ornamental, Aquatic and Domestic Fowl

In this chapter, Nolan explains how to collect eggs for natural hatching under a broody hen, the development of the egg, the process of hatching and initial care of the chicks. I’ve made some small corrections to basically improve readability for the modern audience.

In Collecting Eggs, For Hatching

You should prefer those newest laid, and while gathering, to be kept dry, clean, and free from damp or foul air; and if embedded in dry bran, you win find the advantage.

You will have to recollect the necessity of impregnation by the cock; and prefer the moderate-sized eggs, the over-large or over-small, not being advantageous for hatching, the soft-shelled or ill-shaped egg to be rejected.

It is absurd to suppose that the gender of an egg can be ascertained from its appearance.

The hen usually commences laying in the spring, and again in the summer; but if kept warm and well-fed, you may have eggs at any season. The approach of laying is indicated by the comb and wattles of the hen becoming a bright scarlet.

The eggs should be taken from the nest every afternoon, when no more may be expected to be laid; for if left in the nest, the heat of the hens, when laying next day, will tend to corrupt them.

Some hens are much more productive than others; I have had some of the Cochin China to lay two eggs a day, not constantly, but occasionally, with one egg on the intermediate days.

But the grand secret of procuring an abundance of eggs, is comfortable housing and abundance of food. Early pullets will lay all the winter, if well housed and fed.

The laying continues more or less during the summer, until the moulting commences. The older the hen, the later she moults, and, consequently, commences to lay later in the season, perhaps not till April.

The air-bag is placed at the larger end, between the shell and its lining membranes; it is about the size of the eye of a small bird, in new-laid eggs, but is increased as much as ten times in the process of hatching, or when the egg begins to get stale.

The air-bag is of such importance, to the development of the chick, that if the blunt end of the egg be pierced with the point of the smallest needle, the egg cannot be hatched.

You will recollect the eggs must be rendered reproductive, from previous threading of the cock, as well as being fresh, and not exposed to bad effluvia or moisture, and while collecting, previous to hatching, covered with bran.

Some say pointed eggs produce cocks, and round ones hens; and others, that if the vacancy caused by the air-bag, at the blunt end of the egg, appear to be a little on one side, it will produce a hen; if this vacancy be exactly in the centre, it will produce a cock.

Not having faith in the above, I quote it for the advantage of those who may wish to test its authenticity.

If fresh eggs are laid, after the hen begins to sit, they should be forthwith removed; and if she break any of her clutch, they should be carefully cleaned away, and her feathers, if soiled by the broken egg, made perfectly clean.

Old hens are, in general, better sitters than pullets; and middle-sized, plump hens better than the very large ones.

The clucking of the hen, when she has an inclination to sit, cannot be mistaken. It is best to have a few valueless eggs to put under a hen, for a few days, to ascertain if she will sit steadily, before you entrust a valuable clutch to her; when you do, give her the eggs intended to be hatched.

Most persons prefer an odd number, the odd egg being placed in the centre, and the rest round it – say seven, nine, eleven, thirteen – according to the size of the hen, extent of her wings, and season of the year.

If the hen, after sitting, lay more eggs, they should be immediately removed, as they will be too late for hatching; and if by accident or otherwise, she break any of the clutch, they should be carefully cleared away, and her feathers examined and cleansed, lest they adhere to, and destroy more of the eggs, or give her an inclination to break, and, perhaps, devour them.

The clucking of the hen, which indicates a desire to sit, is too well known to require any description.

If your eggs are of a particularly fine kind, it may be desirable not to put them under the hen, till you have satisfactorily found her to be a steady sitter, by having some eggs, which you consider of no value, placed under her, for a day or two.

If any get cracked during incubation, a small portion of paper, pasted on the cracked part, has been found to be a perfect preservative.

Experience has proved, that the closer you imitate nature, the more certain you will be to succeed.

If a hen lay out, in a private place, she is likely to produce a chick from every egg. It is found that eggs set on the ground, in a soft, sandy spot, with some short-cut, clean straw, in a quiet situation, free from other poultry, succeed best. The evaporation from the ground, seems necessary to the hatching, for the want of which, Mr. Cantelo recommends their being slightly damped with a sponge, on the top only, about mid-day, daily.

After the tenth day the eggs should be closely inspected, and those that have not germinated removed ; if any bad egg be discovered after this, it should likewise be withdrawn.

The following is an account of the progressive stages of the egg of a hen, during incubation:—

Development of the Chick in the Egg

Some succeed in breaking the shell in an hour, while others take a longer time, the time of incubation being twenty-one days, at which period you should expect the chickens to be appearing.

Should any of them be heard in the shell, for twelve hours after they should come out, you will have to assist them, by breaking the top of the shell.

If found to be glued to the shell by the white of the egg, the bird must be assisted to extricate itself, by the most gentle means, and but at small intervals, at a time, and during a lapse of from twelve to twenty hours—no hurry, no violence.

The day of their exclusion from the egg, the chickens do not want to eat, but should be left in a clean and comfortable nest. The next day they may be put into a coop or basket, with some clean and comfortable lining, and fed with soaked bread and milk, and egg boiled hard, and chopped fine; pure water is essential.

When about a week old, turn them out in the sun, of a dry day, for a short time, and feed them with oatmeal, curd, chopped egg, and bread crumbs, with chickweed or lettuce cut small.

When a fortnight old they may be permitted to follow the hen, where she will scratch up insects for them, which are most nutritious.

Economists in poultry, frequently add two clutches together, by putting the second under the hen at night, and then giving another clutch of eggs to hatch, to the second hen, or permit her to lay.