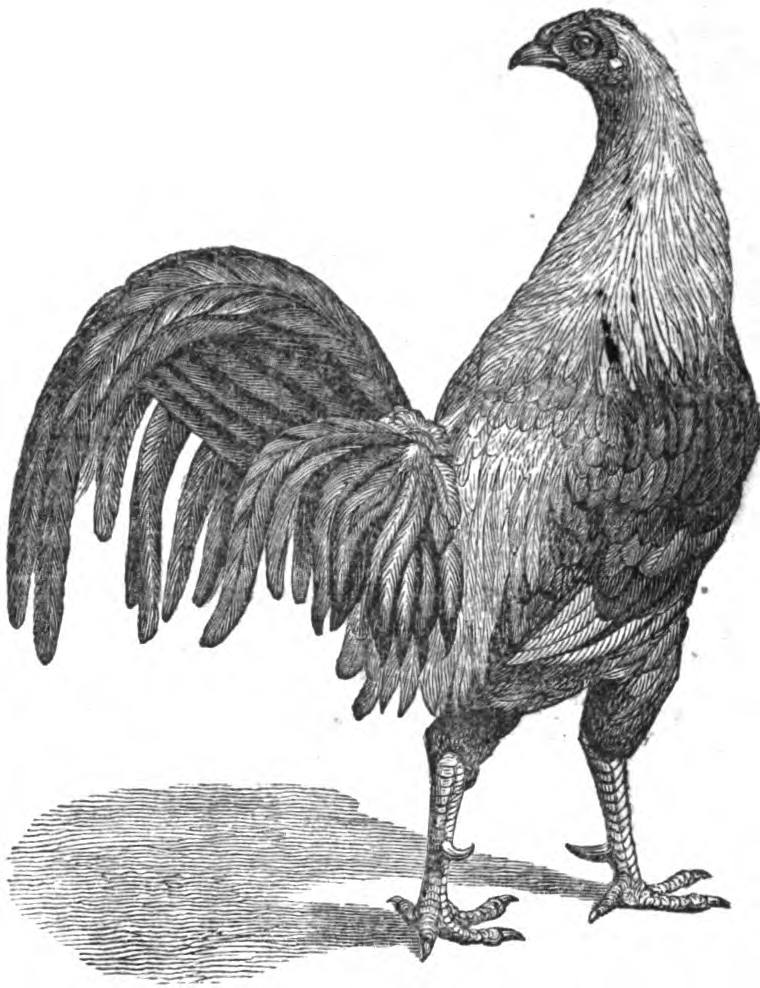 Game fowl were specifically bred for cock fighting which was officially banned in England and Wales in 1835 but remained legal in Scotland until 1895. I’m not sure about the legal status in Ireland in 1850 but Nolan provides a detailed history of the ‘sport’ in Britain.

History of Cock Fighting in Britain

It is not particularly known when the pitched battle was first introduced into England. We have no notice of cock-fighting earlier than the reign of Henry II. William Fitz-Stephen describes it then, as the sport of school-boys, on Shrove Tuesday; the theatre was the school, and the schoolmaster, it seems, was the controller and director of the sport.

The practice was prohibited in the 39th of Edward III., but became general under Henry VIII., who was personally attached to it, and established the cock-pit at Whitehall, to bring it more into credit.

James the First was so remarkably fond of it, that, according to Monsieur de la Bodenie, who was ambassador for Henry IV to the King, he constantly amused himself with it twice a week.

Under Elizabeth, it was not less in rogue, and the learned Roger Aschara, then favoured the world with a treatise on the subject.

There was then a pit in Drury Lane, Horseferry Road, and Gray’s Inn Lane, St. James’s Park, and another in Jewin Street; but the practice was a second time prohibited, by an act under the Protectorship, in 1554.

Our Dublin pits are of a more recent date, the principal of which were in Clarendon Street and Essex Street, where the Meaths and Kildares often proved the powers of their cocks. The fights were managed by men, who made a livelihood by it, and were called handlers: they alone were admissible within the “magic circle.”

A cock-pit, like a race-course, in a sporting point of view, was for every person, and selection of company was entirely out of the question. The noble lord, and the needy commoner, were both at home, after they had paid their tip, for admission; and persons who enter the pit to sport a crown, bet a sovereign, or to put down their pounds, are too much interested upon the main, to consider who they may choose to “rub against” for the time being.

Cocking was kept up with great spirit at Newcastle. At one of their last meetings, the cockers at the above place, in point of extent, exceeded everything of the kind known in Great Britain.

Upwards of 200 cocks were fought, and the fighting generally good, particularly the cocks of Baglin-hill and Lockey, which all won great majorities.

It is also calculated that, at the termination of the races, which finished with cocking, upwards of 1,000 cocks had met their deaths. Newcastle, therefore, challenged the world for cocking. Cheltenham, Chester, Gloucester, Norwich, Lancaster, Preston, Stamford, &c., &c., were celebrated for their cocks.