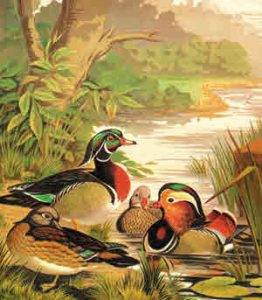 Our practice, which always worked well, was to give a compound ration of pellets in the morning, when the ducks were first let out of their house.

The pellets were placed in a long, wide and heavy based feeder that they could not tip over.

Ducks’ bills are adapted for scooping so that the bill goes into and under the food. It is important to avoid powdery foods otherwise the nostrils can become clogged.

If a compound mash (powder) ration is given rather than a pelleted feed, it should be moistened with water in order to produce a crumb consistency. This can also clog the nostrils however, and I prefer to give pellets so that this problem does not occur.

The feeder also stays cleaner, an important aspect in preventing disease. All feeders should, of course, be cleaned on a regular basis.

Whatever form the food is in, there should be fresh water nearby. Domestic ducks will often eat some food, then waddle over to the drinker before returning for some more food. Having the feeder and drinker close to each other therefore makes sense.

In a run, it is a good idea to have these placed on a slatted area so that water falls through, otherwise there will soon be a marsh.

As soon as our ducks had eaten, they would rush off to the pond, spending the rest of the day dabbling about there, and browsing on the grass and in the hedges. In the afternoon, they were given their grain ration on the grass.

More pond dabbling and browsing would ensue until dusk when they went into their house for the night. If ducks are reluctant to go in, a little bit of grain in the house soon makes them change their minds. Once they are going in, however, it is as well to discontinue the practice, in case rats are attracted to the house and gnaw their way in.

Home-produced feed can be given, as long as it does not provide too much of one thing at the expense of other nutrients.

Suitable ingredients include green or vegetable garden foods such as nettles, lettuce, carrots, brassicas and alfalfa (lucerne), etc. They should be well chopped or shredded so that there are no items large enough to cause impaction. They must be used fresh, with any leftovers disposed of before they become mouldy. (The latter is a sure way of introducing disease).

Boiled potatoes (not green) mixed to a crumb consistency with wheat meal or oatmeal is a good ration for table ducks, especially with chopped greens added. Whole mixed grain is also appreciated with this ration.

Kitchen scraps should not be given to ducks.

There are obviously many different feeding regimes, depending on the type of ducks and nature of the enterprise but as a general rule, the guidelines are: