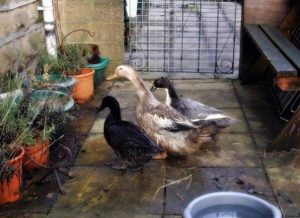 Feeding Ducks Grain, Grass and other Necessities by Katie Thear

Grain such as wheat or a mixed grain ration is popular with ducks, both domestic and ornamental breeds. It is useful to feed it in the afternoon, particularly when placed on a clean area of ground. Unlike pellets, the grains will not disintegrate into a mush and are soon scooped up.

Ornamentals in larger collections are often given their grain ration in shallow water. This helps to deter wild birds, such as pigeons and starlings, from helping themselves.

A long, shallow and perforated trough or dish will keep the grain in one place, in shallow water near the bank, while preventing it from becoming submerged in mud. Alternatively, the grain can be fed in a shallow, non-perforated trough on land, with a little fresh water on top.

Where domestic ducklings are being introduced to whole grains for the first time, it is a good idea to soften them in water first, until they get used to it.

As they get older, they soon get used to eating it dry, but it is important that their drinker is always close by. Small breeds may prefer to have kibbled (chopped) grains.

Wheat & Other Grains for Ducks

Wheat is, in many ways, the best all-round grain for ducks. Good quality wheat is approximately 11% protein. Oats are high in oils as well as protein and are therefore a useful winter feed.

They are not always popular on their own however, and may need to be mixed in with wheat. In summer, the heat-producing qualities may be too great and it is wise to reduce the amount, or not to feed them at all, unless they are in a mixed grain ration from suppliers.

Maize is also high in oils and is usually a constituent of mixed grain.

Barley is a useful source of nutrients, but again, on its own will tend to be left. The source of barley is also important because some of the chemical sprays used on the plants in some arable areas may be toxic to poultry. A letter from a friend in the USA detailed how she had lost some chickens in this way.

Our practice, when it came to feeding grain, was to feed wheat in the summer months and mixed grain from a feed supplier in winter. The extra calories helped to compensate for the additional demands made on the system during the cold months.

Seed Mix for Pasture for Ducks

If a grassed area is to be sown, a suitable mixture would contain Perennial Ryegrass, Cocksfoot, Timothy, Fescues and White Clover.

Other Green Foods for Ducks

Other greens that ducks are particularly fond of are Chickweed, Stellaria media and vegetable garden greens such as lettuce and cabbage. They will often eat plants in situ where they are growing in patches, but if picked for them they should be shredded into small pieces to prevent digestive blockages. Alternatively, bunches can be suspended in an enclosure.

It is easy to cause an imbalance in the diet by too much feeding of one thing at the expense of another. Our practice was to let the ducks browse for greens themselves, so that they were only taking ‘standing’ plants. This was foraging in the field, with access to the vegetable garden in winter, when they did a useful job of weed clearance and pest control for us. Their basic diet, however, was compound pellets and grain.

Pond plants such as the floating duckweed, Lemna minor, are a valuable source of food for dabbling ducks. Other plants provide oxygen in the water as well as a habitat for insect larvae. These, in turn may be eaten, as well as fish and even the occasional frog. Reference has already been made to floating compound pellets that are available for ornamentals, such as the Mergansers, as well as to the practice of placing grain in perforated troughs in the water for ornamentals in general.

This shortened article is taken from Starting with Ducks by Katie Thear and used with permission of the publishers.