Just like Chickens the garden duck is at risk from predator attacks such as foxes. Training ducks to go into a coop or house takes only a few nights and makes sure your new pets are warm and protected. Picking the right duck housing is very important. 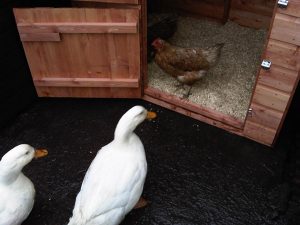 All ducks will need a warm safe night house. When building or buying a duck house you need to look out for the size of the pop hole, the height of the house and the ramp to the house. Make sure the house is sturdy and has good ventilation holes at the roof of the house.

Smaller ducks such as call ducks require the same size of housing as large breed chickens – about one-foot square per bird.

Often pre-bought chicken coops can be used for ducks provided they have no perching bars restricting the floor space for the ducks. There are now a number of budget perch-less duck houses on the market, such as this Kerbl Duck House, which are worth considering too. Something to look out for is the size of the entrance or pop hole. Make sure your biggest duck can get in through the door as these are often designed for smaller birds and Runners and Aylesburys need that extra bit of width to get into their house at night. We actually found that a large wooden dog kennel worked best for our Aylesbury boys as they were almost as big as a goose.

Ducks don’t usually fly up to the coop the same as chickens, being a ground nesting bird so a ramp will need to be provided so that they can access easily. This allows them to get in and out without injuring themselves.

When you first get a new coop or house often the ducks will refuse to enter and will look concerned at the new building. If possible get them used to it being in the garden for a day or two before moving them into it. To train a duck to go up and down the ramp trail some food along it and watch them start running up and down without hesitation – I find tomatoes are the best way to get ducks to do what you want.

The same trick should be used at night to get them into the new house. Show the ducks a bowl of food and place it in the back of the house leaving a trail to it for a day or two. The ducks will soon be using the ramp and going to bed at dusk without any problems.

So much easier for the duck keeper than the chicken keeper! Flightless, large breed and clipped wing ducks are very easy to contain in an area of the garden. A two to three foot barrier will suffice. Make sure the run has at least two meters square for the birds to range in. A movable wooden and mesh run is a great idea as you can move the ducks around the garden letting them eat all the pests, but stopping them from damaging an area through over use.

Remember though that just because the ducks cant get out doesn’t mean the predators can’t get in – see our articles on fox proofing for more information.