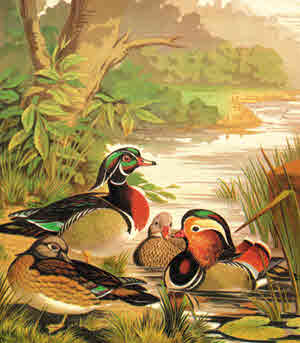 All ducks, whether dabblers, divers or perchers, have the same need for nutrients in the form of proteins, carbohydrates, fats, minerals and vitamins; it is merely the proportions and the form in which they are found or presented that vary.

A balanced diet is essential, for too much of one type of food at the expense of other nutrients can soon lead to problems. The fact that people often throw bread to ducks on public park ponds does not mean that this is their sole diet.

This is not to say that bread cannot be given, but it should be an occasional rather than a regular item. Dried bread should be broken into small pieces and soaked, for choking is not un­heard of. It is also vital to ensure that any bread given is free of moulds. The ideal diet is a compound ration with all the necessary nutrients.

Compound feeds normally consist of wheat and maize, with soya bean meal and soya oil added in order to provide the extra protein and energy requirements. Minerals and vitamins are also added to ensure against deficiencies.

They are formulated in several forms, depending on the age of the birds and whether they are domestic or ornamental breeds.

Many ornamentals, for example, need a higher protein level because they are used to feeding on insect larvae and crustaceans in the water. Some feeds may contain fishmeal, but these are usually for ornamentals rather than domestic breeds. Egg and table breeds are best fed on a free-range or organic ration that has plant-sourced proteins. This caters for consumer preference, as well as ensuring that eggs do not acquire a fishy taste.

It is important to remember that the nutritional requirements vary at different stages. Ducklings require a higher percentage of protein than adults, so a starter ration of compound crumbs is advisable. These are available without anti-coccidiostat medications which some chick crumb rations contain. A starter ration is usually given for the first few weeks of life.

There are also grower rations for young ducks, to follow on after the starter crumbs. This type of feed has a reduced level of protein, normally around 15%, but may be even lower if slow-growing, free-range table ducks are being reared.

Before the breeding season starts, it is a good idea to feed a breeder ration to domestic and ornamental breeds. This formulation ensures that the breeding birds are not lacking in any of the crucial nutrients, and the ducklings are less likely to suffer from nutritional deficiency complaints.

Examples of Compound Rations for Ducks

*Formulation varies according to the type of ducks. Some float on water for ducks such as Eiders, Goldeneyes, Mergansers and Smews.