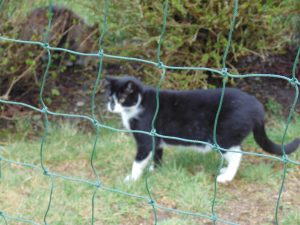 Sometimes feral or other people’s pet cats can be a nuisance. A hen run can, if necessary, have garden netting put over it to keep them out, as detailed earlier. The most effective deterrent, however is to have your own cat or dog, or both, to stake a territorial claim that will be heeded.

Domestic cats and dogs will usually learn not to chase poultry or other stock on their own territory. Young puppies may need to be trained in this respect.

Other people’s dogs should be kept out and normal garden fencing is usually adequate for this. For more open areas, where hedges, may be more common, aim to keep the hedge well managed and pruned to provide thick lower growth, or use netting to block off any gaps.

In Britain, we do not have predators larger than the fox, unless you believe the stories of the escaped puma/large cat, etc. In this case, a resident dog provides a good warning, as will as a sharp-eyed guinea fowl perched in a tree.

Finally, it is worth remembering that one of the most effective predators is the human thief. Some traditional breeds of poultry are rare and become the focus of unscrupulous breeders.

This is particularly true of game fowl where there is a steady trade serving illegal cock fighting. Christmas poultry are also at risk.

Walls and fences can be extended with trellis for climbing plants, such as roses, whose thorns will also act as a deterrent. For other boundaries, particularly longer ones around land dense, prickly hedging such as hawthorn or Rosa rugosa against wire mesh fence are effective.

Items such as ladders and garden or workshop tools should be locked inside a secure building. A garden spade can be used to lever open doors.

External lights can be used around the house and outbuildings. The lighting can be adapted to switch on when someone approaches, by fitting an internal controller to set how long the light remains on after it has been triggered.

To protect large open areas, some form of surveillance equipment may be needed. An infra-red beam system can be installed, which will not be triggered by cats, dogs or birds and which can be linked to a combination of lights and alarms as required. A radio beam transmitter can pick up intruders and trigger an alarm in the house some distance away, without the intruders being aware that they have been detected.

There are many professional firms to install systems. Whatever is used, make sure that the installation and maintenance conform to nationally recognized standards such as the British Standard BS4737. Many areas now also have ‘neighbourhood watch’ schemes where people cooperate to their mutual benefit.