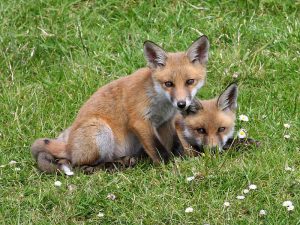 The fox is undoubtedly predator number one when it comes to free-range poultry, and the only safe option is to keep flock and fox physically separated.

In the past, this was often difficult because landowners who would not allow effective fences to be erected in case they impeded the horses during a foxhunt owned much of the land.

It was also an offence for many smallholders on rented land to kill a fox because this was depriving the landowner of his sport, and to do so carried the risk of eviction.

Writing in 1930, Sir Edward Brown refers to this attitude: “Most powerful was the opposition of landowners and of larger farmers. The former of these regarded food production as secondary to sport, which to many of them was a leading object in life. They anathematised smaller farms and holdings. To kill a fox was an unpardonable sin”. (Ref: British Poultry Husbandry. Sir Edward Brown. Chapman & Hall. 1930).

Under these conditions, the only option was to make sure that all the birds were confined in a secure house at night and to utilise hurricane paraffin lamps as a defence, a procedure that A. K. Speirs Alexander mentions in 1948: “Our new batch of growers could not be induced to come back at dusk; the result over 50 killed, in spite of hurricane lanterns set about on poles.” (Ref: Hens on the Land. A. K. Speirs Alexander. Farmer & Stockbreeder. 1948).

In many areas, in living memory, it was the custom to “do a deal” with the local poacher; that he would quietly capture and kill the fox and receive some plump, oven-ready chickens in return for his cooperation.

The Second World War and taxation loosened the stranglehold of many big landowners on rural areas. Poultry keepers were able to erect high fences around their properties, but it coincided with the onset of “deep-litter” houses where flocks began to be housed indoors, a move that ultimately resulted in intensive battery and broiler houses.

It was not until the re-emergence of commercial free-range poultry keeping in the 1980s, that the question of anti-fox protection began to be seriously addressed again. Two options have emerged as effective means of protection: tall fences and electric fencing.