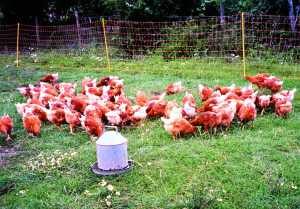 The availability of electric fencing has transformed free-range poultry keeping. It is arguable that without it, the keeping of extensive commercial flocks would never have happened.

An electric fence circuit has four parts: the controller or energizing unit that provides the electricity, conductor wires held by insulators, the predator to be excluded and the ground on which the fence is erected.

The controller produces pulses of high voltage electricity, which travel to the fence wire via the output lead. The earth lead of the controller is securely earthed to the ground. The circuit is incomplete until an animal touches the wire and receives a shock as the electric pulse goes through its body to the ground. The voltage is not enough to hurt the animal, but is sufficient for it to be given a wide berth in future.

Energizers are either mains or battery-operated. The former must always be installed inside a building and the instructions from the manufacturer followed precisely.

It goes without saying that all mains electrical installations should be carried out by a qualified electrician. Mains operated systems are normally used for permanent perimeter fencing. Battery-operated energizers are more commonly used on a small-scale, or where a fence is moved frequently. They usually operate from rechargeable batteries, either two 6-volt batteries or one 12-volt one. Wind-powered and solar generators to energize the fencing system are also feasible.

If there is an existing perimeter fence or hedge that merely needs supplementing, then two strands of electrified wire, top and bottom, may be sufficient, erected about 25cm outside the existing barrier.

Where access to the land needs to be controlled on a daily or weekly basis, it is not practicable to move a permanent fence. Lightweight electric netting is available, that can be dismantled, rolled up and re-erected further on. It is effective at controlling the access to specific grazing areas, as well as excluding a fox.

The netting is made of polythene and stainless steel conducting twine and is erected with support poles and ground spikes. Grass must be kept short where an electric fence is erected, otherwise the growth will earth the current and the fence ceases to function.

It is worth reiterating that fencing and netting specifically for keeping hens in and foxes out is the type to purchase. General-purpose electric fencing for keeping livestock in will not necessarily keep a fox out.