This article on trussing a chicken for the table is an edited version of the piece printed in Wright’s Book of Poultry  (1912 Edition). However, chickens are still chickens and this has to be the definitive traditional method.

Hopefully it will be of value to those who raise table birds at home or on a small scale.

There are various ways of trussing a fowl; the old-fashioned plan with skewers, the liver
being tucked into one wing while the gizzard graces the other, being described in most cookery books.

A much superior method has, however, been more and more adopted by the best London tradesmen during recent years, and is likely to supersede all others wherever it becomes known.

A Superior Method of Trussing a Chicken

Removing the Sinews from Drumsticks

The first thing is to draw the sinews from the drumsticks. This can be done in two ways. Making a longitudinal incision in either side of the shank with the point of the knife, about an inch above the foot, the end of a skewer is inserted under the sinew, the skewer twisted round it for a purchase, and taking the skewer in the right hand, the sinew is drawn out.

The other way is to treat it like a turkey’s leg, cutting across the shank in front, just above the foot, down to the bone, and bending the foot further over till the shank-bone breaks ; then hooking the bent-down foot into a V-shaped hook (an ordinary meat-hook does not answer: the angle of the V is required to “jam” and hold the foot firmly), and pulling the limb down, the foot and sinew are left behind.

Either now or previously the two points are cut off from each wing, and either all the toes half an inch from the ball of the foot, or some cut off the entire foot, which we think is preferable, even when not done in drawing the sinew.

When a fowl is thus prepared at home, all these trimmings should go into the stock-pot along with the liver, gizzard, neck, etc.

The sinew above the hock-joint, in front, is also cut across, in order that the shank may “lay out” nicely, instead of doubling up as in the natural position.

Next we take off the head and neck. With the fowl’s breast downwards, pinch up the skin at the back of the neck close to the shoulders, insert the point of the knife longitudinally at the side, and cut upwards so as to leave a small flap about an inch long.

Draw this flap back, and pressing the very top of the breast firmly down to the table, cut through the neck-joint close to the root, or level with the shoulders, leaving no neck-bone projecting.

This is to be done, however, without cutting through the skin on the lower or breast side, which is simply scraped fairly clean of flesh and the congealed blood which may have collected.

We thus have a small flap an inch beyond the stump of the neck at the back, and a broad flap from the breast or front, which is cut off about three inches long. In trussing up, the back flap is first folded over the stump ; then the broad flap, when secured over this, keeps in the juice and the gravy.

The crop can now be easily “peeled” away from the surrounding flesh, always commencing from the left side and going round, and is cut off,with the remnant of windpipe, pretty far in.

The forefinger of the right hand is then introduced into the cavity, and worked thoroughly round, as deeply as possible, between the viscera and carcase of the bird, loosening everything all round, as far as the finger can reach ; upon this depends easy “drawing.”

The fowl is then held tail upwards on the table, and a cut about half an inch deep made across just under the tail-joint or “parson’s nose,” and above the vent.

The hooked forefinger can now be passed round the lower end of the bowel, and a small loop pulled out ; inserting the knife under this, cut upwards, and the vent is cut out without dividing the bowel.

The first two fingers of the right hand are then inserted so as to embrace the gizzard, when, if the loosening in front has been properly done, the entire viscera, including intestines, lungs, liver, gizzard, and gall-bladder, are pulled out quite easily in one mass, leaving the interior perfectly clean, and needing neither washing, wiping, nor any further operation whatever.

The merrythought (The old word for the wishbone) should next be removed, though this is of course optional : if in a family the bird has to be made “go round” as far as possible, and the merrythought is desired for a separate portion, such a step will of necessity be omitted.

Pulling back the skin, the flesh is scraped a little down the front of the two bones, after which the point of the knife will lift each out of its seat without any meat adhering. This gives a much better breast, and in the case of a large fowl, enables good slices to be cut as from a turkey.

It is really better to do nothing further to the breast, especially for home consumption; and a well-fed Surrey fowl needs nothing even in the way of appearance, the forcing up of the back and subsequent pressing bringing the meat up well.

Either the poultry-knife is inserted through the vent, in the transverse or flat position, and the point driven by a smart tap through the flat of the breast-bone just under the front of the keel, which is held down on the table ; or a steel skewer may be inserted from the front at the same point, and given a slight wrench right and left, breaking the thin flat bone in the same way.

In either case, a very slight tapping with the flat of the knife afterwards will then drive in the entire breast-bone, without any fracturing of the keel itself, and the look of the breast is much improved. We look forward to the time, however, when even this method shall be discarded.

All is now ready for trussing, for which we require a straight trussing needle eight or ten inches long, threaded with twine.

We will first take a fowl for roasting. The bird is laid on its back, with the neck towards the operator, with the first or thigh joint of the legs held down to the table, and the needle with twine is passed straight through both thighs and the body, just above and touching the thighbones, and rather nearer the joint than the middle of the bone. 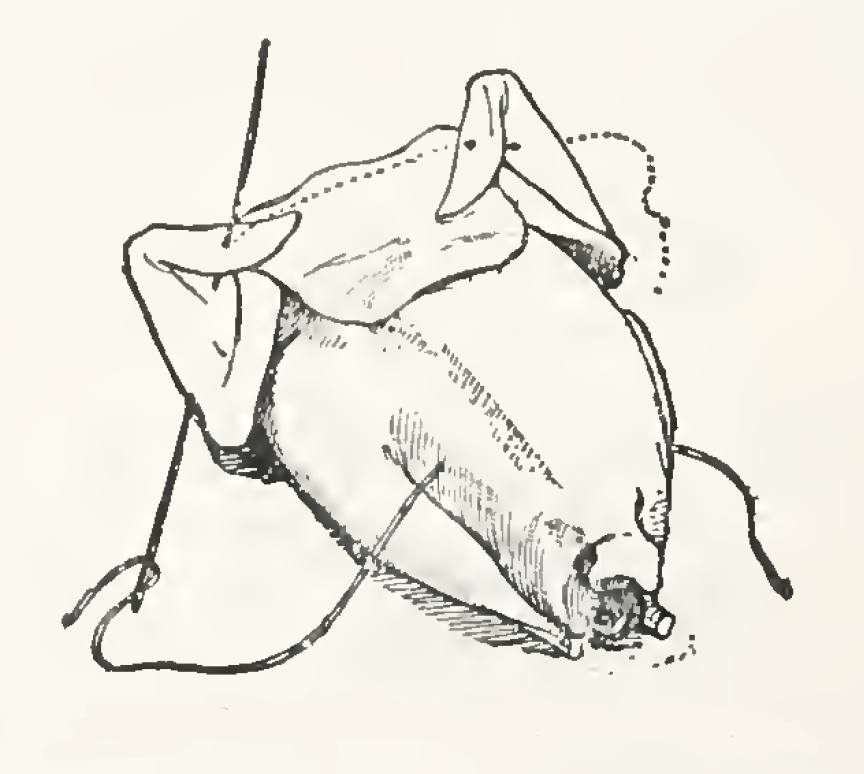 Fig 1: Threading of the WIngs

The back is then turned uppermost, the pinions turned or twisted inwards so as to point towards each other over the back, and the same twine taken through the wingbone {i.e. the double-bone) near the centre and between the two bones, then through the pinion, thence over the end of the doubled-down breastflap of skin (now doubled close over the stump of neck and its little flap, on to the back), thence the reverse way through pinion and wing-joint of the other wing (Fig. 1).

The twine is then drawn up sufficiently tight and tied ; it should not be too tight, or the fowl will not lie firm on the dish, but so that the two wings stand about parallel and square. Threading the needle again, it is next passed just under the bone of the back at the loins or haunches, where there is a small hole on each side apparently designed by Nature for the express purpose, which can readily be seen in any denuded carcass of a fowl.

Thence the twine is taken over the end of the drumstick, through the body again, just over or embracing the flat part of the back end of the breast-bone, and over the other drumstick to be tied. The fowl is then finished, as in Fig. 2. 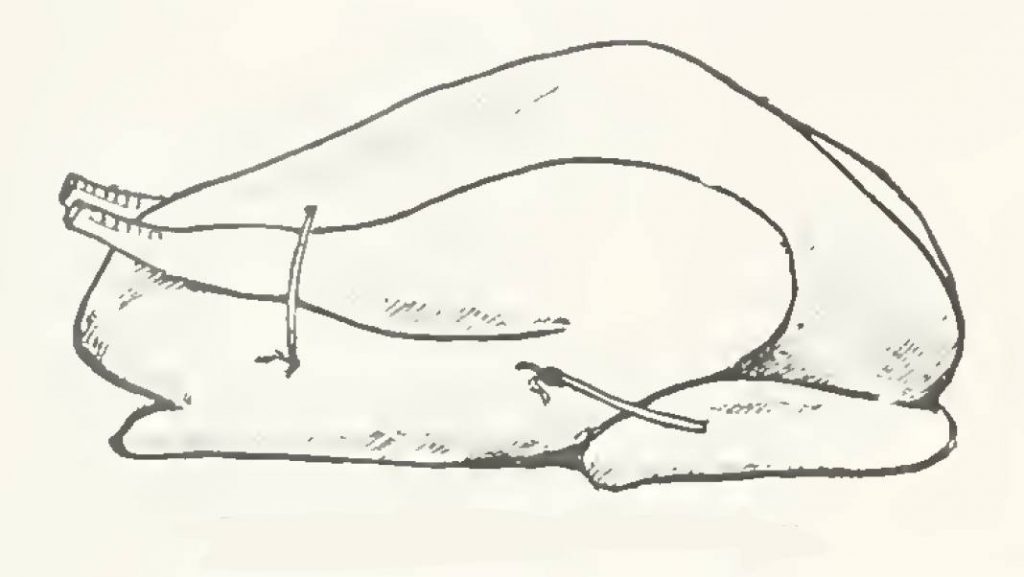 For boiling the fowl is treated differently. It is beheaded, drawn, and merrythought and sinews removed, as before. The fingers are then introduced through the vent, and the skin loosened or separated from the flesh at the side of the breast, and all round the thighs and drumsticks, down to the hocks.

A crosscut is now made down to the bone, at the back of each drumstick an inch above the hock, and another across the front of the shank an inch and a half below, dividing the sinews.

Each foot in turn is then taken, with the bird on its back, and the doubled shank wrenched or twisted inside the drumstick, so as to lie rather under the latter instead of above, in which process the joint is heard to crack.

The shanks are then doubled in, when it will be found that, by the aid of the cut made above the hock, that joint can be pushed in and the loose skin stretched and coaxed and drawn over the whole, hiding the entire leg from view, the projecting part of the shanks being finally cut off.

Female cooks generally prefer to cut the feet off first, pushing in the doubled limb afterwards. It is customary with some also to crack the shoulder-blades, by a smart blow with the back of the knife between the neck and shoulder of the wing on each side, which gives a more rounded shape when the bird is tied together; but this is not necessary.

In trussing, the wing- and thigh-joints are secured and tied the same as already described (Fig. 68). The other tie securing the legs may also be made in the same way, being in no way affected by the fact that this joint is now hidden under the skin, but there are several other methods. One is to make a single tie round the entire stern of the fowl : another to pass the needle through the drumsticks and round the back end of the breast through the body, and tie over the back.

For that shown in our illustration, the needle with twine is taken through body and drumsticks as just mentioned, the twine then taken and crossed round the knuckles, and pulled well in, and the crossed twine tied over the back, which is a very neat tie.

Finally the tail-joint is tucked down into the vent, and the bird is finished as in Fig. 3. 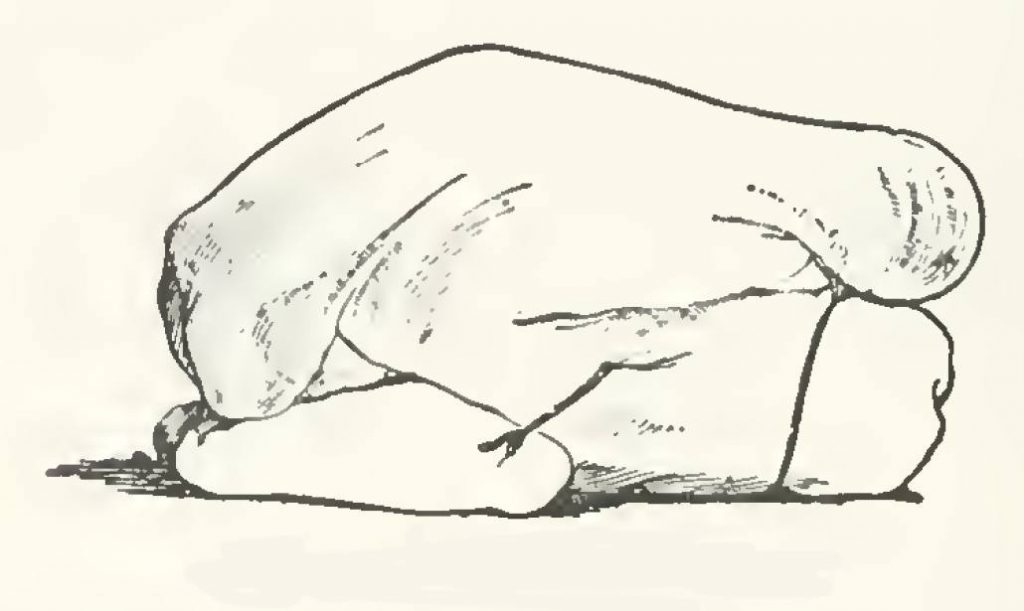 While, however, a fowl thus trussed looks nicest on the table when covered with white sauce, some lady housekeepers prefer for carving to dispense with pushing the leg under a skin apron, simply removing the shank at the hock joint, and otherwise trussing exactly as the roasting bird in Fig. 2.