Plucking a Chicken – How to Pluck a Chicken 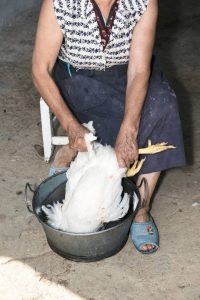 This article on plucking a chicken is taken from Wrights Book of Poultry, circa 1912. It’s as good a description of how to pluck a chicken as anything published since. I’ve added a couple of modern additions which should make the job of plucking a chicken easier for home poultry keepers.

How to Pluck a Chicken

Plucking the fowls is more easily carried cut if the operation takes place immediately the bird is dead, and whilst the body is still warm.

It is frequently objected, by reason of the muscular action which is observed in a bird immediately after death, that it must be suffering pain. But upon this point the best veterinary authorities in the country, including the late Sir George Brown, of the Board of Agriculture, have assured me that it is impossible for the bird to have any sense of feeling after the brain is severed from the rest of the body.

Hence we need have no qualms of conscience upon that score. If, however, it is impossible to pluck the birds as soon as they are dead, then they should be allowed to become quite cold before the work is carried out, for it is found that the flesh of a bird is much more liable to tear when it is half cold than when either warm or entirely cold.

The best method of plucking is to have a seat about 20 inches in height, the operator sitting thereon, holding the bird by the legs and the wings, as already described for the process of killing, the head hanging downwards in front of or between the legs.

By so doing it will at once be seen that the blood, during the time the bird is cooling, is draining away to the neck, whereas it would not be so if the bird were head upwards.

Order of Plucking the Feathers

The operator plucks the feathers the reverse way to that in which they lie upon the body, and the position named enables him to do so with ease. He should start upon the back, taking hold of several feathers between the thumb and forefinger of, say, the right hand, and, giving a sharp pull downwards, they come out quite easily.

Of course, the knack of pulling the feathers only comes by experience ; there is a way of drawing them as described, sufficiently sharp to take them out clean without tearing the skin.

When the back has been denuded the bird is turned round and the breast treated in the same fashion. By this time all convulsive movements will have quieted, and thus it is not necessary to hold both legs and wings, in fact it may be held by one leg.

When the breast and under parts have been completely plucked, and the neck up to within two inches of the head, each leg should be taken in turn, held straight upwards by the shank, and if the operator will close his finger and thumb around the shank and run them sharply down the thigh a large number of the feathers will come out, the others being plucked in the usual way.

The wings may now be taken, the small feathers drawn in the ordinary way, but the flight feathers must be plucked either two or three at the same time, gathering them between the fingers.

These require a sharp pull, given with a backward tendency. Of course, the tail feathers must be completely drawn also.

Time to Pluck a Chicken

The plucking of a fowl takes a shorter time to accomplish than to describe, and the regular rate in Sussex is about twelve in the hour ; but I have known a turkey completely and beautifully plucked in less than four minutes, though, of course, this speed could not be maintained for a long period.

The chief points in plucking are :

First, that it shall be done immediately the bird is killed;

Second, that the operator shall draw the feathers the reverse way to that in which they lie, with a sharp pull, yet not sufficient to tear the skin;

Third, that the process shall be carried out as expeditiously as possible.

The reason why feathers are left on near the head is simply to cover up the broken part of the neck, and also that the bird presents a rather better appearance than if plucked completely up to the throat.

Scalding The Chicken Before Plucking

In some districts it is customary to dip the bird in boiling water before plucking, and there is no doubt that this makes the feathers come out much more easily, but it is objectionable for other reasons, if the specimens are to be exposed for sale.

Scalding does no harm if it is intended to cook the birds at once ; but if this is not the case it gives them a soft, flabby appearance, which reduces considerably their value upon the market.

Moreover, there is no need for scalding, provided that the birds are plucked whilst they are warm.

Note: Some keepers prefer to scald even freshly killed birds. A large pot of water is brought to just under boiling and the bird, held by the feet, is dipped in the water for 60 seconds. Do not over-fill the pot or the bird will displace water over the rim.

During certain periods of the year it is found that there are a large number of what are called stub feathers remaining on the body after the fowls have been plucked, and these must be removed.

To do so, however, is a somewhat tedious process, because it cannot be done by the fingers alone. In the poultry districts, as a rule, women are specially employed for the work of stubbing, and they are pretty well paid, frequently receiving a penny per bird.

The best method is to have a short knife, pass it under each feather, grip the feather upon the knife with the thumb, and draw it out sharply ; but fatters, as far as possible, try to avoid killing birds in this stage, although, of course, it is impossible to do so entirely.

All fowls, even when in the best condition, are found to be covered with a large number of fine hairs, and the removal of these makes a very great difference to the appearance, in fact, frequently explaining why some specimens look so much cleaner and nicer than do others.

To get rid of these the bird should be singed. This is a simple operation, yet one which requires a little care. Some people use paper, but it is apt to make too much smoke, and the best thing for the purpose is straw.

A small heap of straw should be made and lighted. At first it will burn with a thick smoke, but as soon as fairly alight there will be a clear flame. The operator then takes the bird by the head in one hand and the feet in the other, and passes it through the flame, turning it over in so doing, by which means it is entirely denuded of the fine hairs named.

Note: Singeing can be done using a cook’s blow lamp or even an ordinary blow lamp.

Unless care is taken, however, the process would have the effect of blackening or burning the skin, causing it to shrivel ; but that can be avoided by rapid movements, as proved by the Surrey fowls which come upon our great markets.