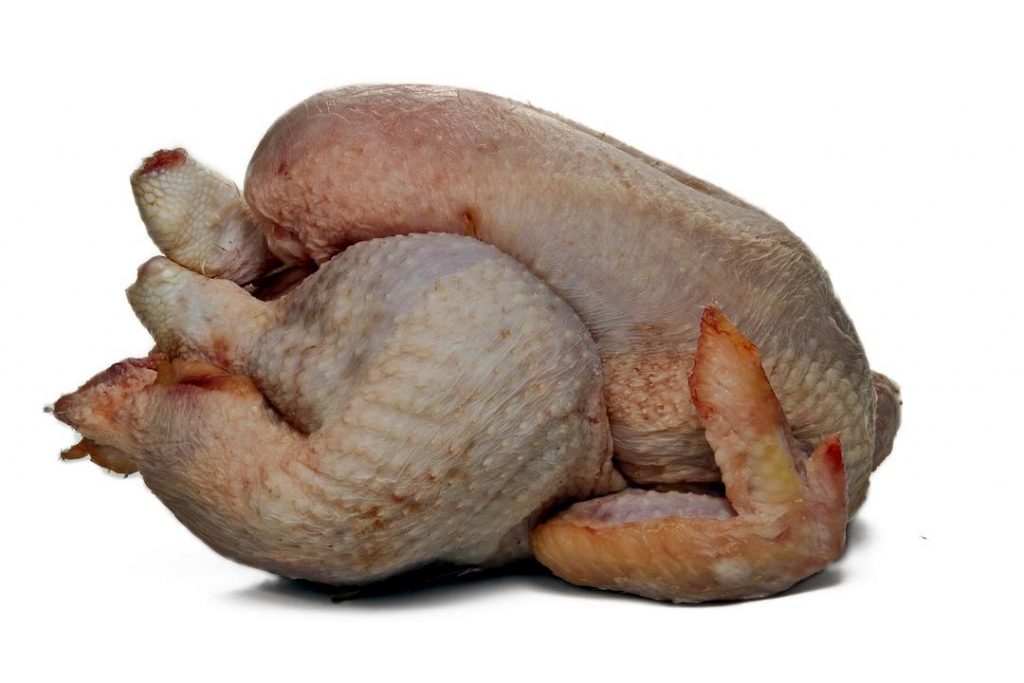 Preparing a Home Killed Bird for the Table

After killing, hanging and plucking your chicken, take your bird to the kitchen to dress it out.

Taking a sharp knife, 2 inches up from the body go round the neck skin, cutting through to release it. Now push that skin back to the body and using a pair of secateurs, chop off the neck as close to the body as possible.

Put the neck in a pot of water. Turn the skin back on the neck and look for any corn in the sack (crop) close to the breast, take it out and dump it with the head.

Now take your sharp knife and go to the legs, feel for the joint at the knee and cut down between this and separate the skin. Remove now completely and put with the head etc.

Take your knife and feel over the bird’s stomach for the lower tip of the breast bone, where it comes to a point, and push the knife point in and cut the skin back down to the tail travelling down to about 1/2 inch from the anus. Cutting in a circle around the anus, remove this.

NB: Do be careful cutting around the anus as you really don’t want to allow the contents out if you can avoid it. If you do split the gut, take especial care when washing the bird

Put the knife down and force your fingers up inside the chicken as far as you can and using your fingers pull down gripping anything that is in the cavity pulling everything out.

Don’t snap anything if you can help it. But don’t worry if you do.

Push your fingers through the cavity that you will feel at the top of the breastbones to feel for a pipe; this is the windpipe. Grip the windpipe using a tea towel and remove it.

Ready For Washing Out

This is your bird completed now except for washing out.

Now take the remains and take the livers and heart out and put them in water with the neck.

These are the gravy making giblets that you get in a little bag with shop bought chickens.

Sort through the innards and feel for a hard lump of meat, this will have white membrane on both sides and is red. Take your sharp knife and holding the gizzard on edge like a shell cut down through the red meat to the centre. 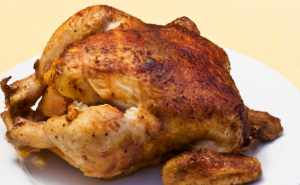 You will find that some small pieces of grit will appear; remove these and force the gap open, like opening a clam, and look for a yellow skin on the inside.

Peel this from the red meat part dump this in the bin in a small bag along with the remains of the giblets and head, put the gizzard in the water with the livers etc.

That is how I kill and prepare my birds. 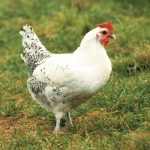 Traditionally cottager's and small farms kept chickens to produce their own eggs and meat. Rather than buying in replacement stock, the flock reproduced its self. Since half the eggs hatched into cocks and hens' egg production fell off with age, they... 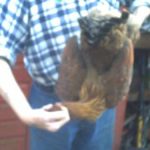 Killing a Chicken - How to Kill a Chicken

Killing a Chicken By 'Muntjac' If you keep chickens for meat or if you need to cull a chicken you obviously want to do it in the most humane way possible. There are sites offering advice that I think are, quite frankly, rubbish so this is how I handle... 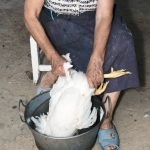 Plucking a Chicken - How to Pluck a Chicken

This article on plucking a chicken is taken from Wrights Book of Poultry, circa 1912. It's as good a description of how to pluck a chicken as anything published since. I've added a couple of modern additions which should make the job of plucking a chicken... 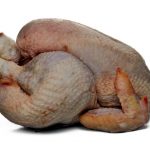 Preparing a Home Killed Bird for the Table By 'Muntjac' After killing, hanging and plucking your chicken , take your bird to the kitchen to dress it out. Remove the Head Taking a sharp knife, 2 inches up from the body go round the neck skin, cutting... 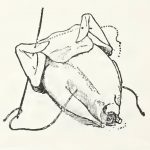 This article on trussing a chicken for the table is an edited version of the piece printed in Wright's Book of Poultry  (1912 Edition). However, chickens are still chickens and this has to be the definitive traditional method. Hopefully it will ...