Most of us have had the experience of finding we have a double yolk egg. Depending on whether you’re a yolk person or a white person it’s either a bonus or a fault. Personally I think it’s a bonus, but I love egg yolk more than white.

Double yolk eggs are actually fairly rare, about 1 in 1,000 for commercial eggs where consistency is required.

Rarer still are multiple yolk eggs, triples or even quadruples and apparently there has even been a nine yolk egg! 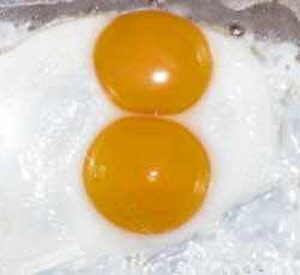 When an egg starts its journey inside the hen, the first thing formed is the ovum in the hen’s ovary. This grows and the colour changes from pale grey to the yellow we know as the yolk colour.

Once it reaches full size, the yolk sac breaks away (ovulation) and begins a journey down the oviduct where the egg white (albumen) and the shell forms around it. The process from ovulation to egg laying takes around 24-26 hours.

Normally, the next ovulation is triggered by the hen laying the egg but occasionally things go wrong and two yolks are released at the same time to travel down the oviduct together, being surrounded by one shell and giving us the double yolk egg.

Twin Chicks in One Shell?

If the ovums are fertile the double yolk egg will contain two viable chick embryos but there will not be enough space for them to develop to hatching. Unfortunately twins from the same egg are not really possible.

Which Breed of Hens Lay the Double Yolk Eggs?

Since the double yolk egg cannot bring forth double chicks, genetically it is not possible to have a breed that consistently produces them. They’d die out! It is theoretically possible to develop a breed where the ratio of double to single yolk eggs is higher than usual but I do not know of one.

Hens aren’t the only bird to lay doubles – ducks do it quite frequently as well. In fact any bird can lay double yolk eggs but it is relatively more common in birds bred to lay rather than wild birds where genetic selection works harder against it.

So if you get some double yolk eggs from your hens, make the most of your good fortune because it won’t last.