The colour of eggshells is the result of pigments being deposited during egg formation within the oviduct. The type of pigment depends upon the breed and is genetically determined.

In 1933, Professor Punnett demonstrated that the blue egg factor is a dominant gene (genetic symbol O).

All eggs are initially white. Shell colour is the result of the pigments called porphyrins being deposited while the eggs are in the process of formation. In the case of the Rhode Island Red, the brown pigment protoporphyrin, derived from haemoglobin in the blood, is what gives the shell its light brown colour.

The Araucana produces a pigment called oocyanin, which is a product of bile formation. This results in blue or bluish-green eggs. Interestingly, the colour goes right through the shell, making the eggs difficult to candle during incubation.

This factor is also an indication of the relative purity of the stock in relation to original Araucanas. The original shell colour of Araucana eggs is blue, but a variety of colours have been produced by crossing Araucanas with other breeds, as follows. 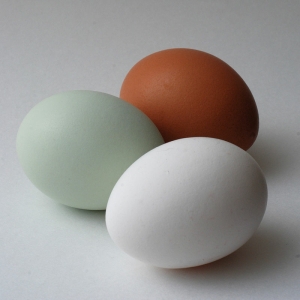 This is a simplification, of course, and there is a considerable range of blue – green – olive hues, depending on the genetic make-up of the breeds involved. Bear in mind that many so-called Araucanas are themselves crosses.

Children are often fascinated to learn that you can rub off the eggshell colour if you get to the egg as it is laid and while it is still damp. Once dried, no amount of rubbing or washing will remove it. Some producers of brown speckled eggs prefer not to use wood shavings as a nest box liner because they smear the markings before they have a chance to set.

Most people in Britain prefer brown-shelled eggs – at least they did until Delia Smith mentioned white eggs on one of her TV cookery programmes. In the USA and Spain white eggs are preferred.

There is no relationship between egg quality and shell colour. The Araucana egg shell colour being blue makes no difference internally at all. Nutritionally they are the same You’d be surprised though how many people still think that brown eggs come from free-range hens while white ones come from batteries!

Selling cartons of different coloured eggs is popular with small producers. It’s possible for example to have a 6-pack carton containing a dark brown speckled egg (Speckledy or Maran); a pure white (White Star or White Leghorn); a pinkish-brown (Rhode Island Red); a creamy white (Ancona or Vorwerk); a mid-brown (Black Rock or Barnevelder); and a bluish-green (Araucana or Cream Legbar).

The latter eggs are particularly popular at Halloween.