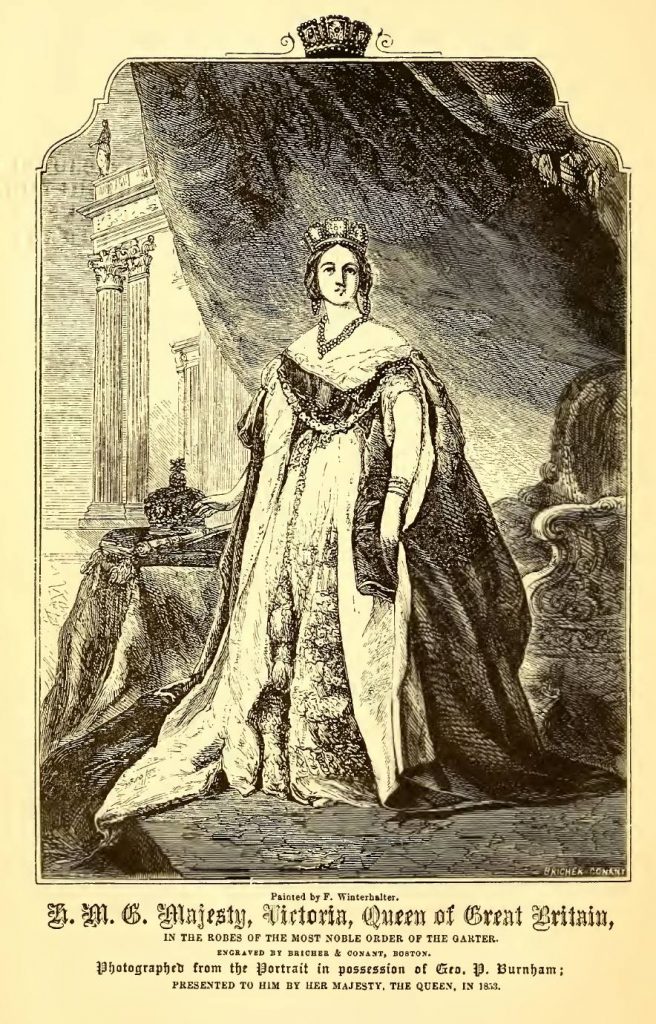 Queen Victoria from The China Fowl by Geo. P. Burnham

The benefits of a celebrity endorsement were well understood and there was no better celebrity than Queen Victoria. Mr George P Burnham was quite open about how he courted these endorsements and made full use of his greatest success by printing the portrait sent to him by Her Majesty on the inside front cover of his book The China Fowl.

The portrait was sent to him in thanks for some chickens he sent to the Queen and established him as an authority. The story is well covered in the Poultry Book of 1867 by Tegetmeier.

….But public attention was first called to them in consequence of an acute American fancier, Mr. George P. Burnham, presenting a consignment to Her Majesty; and these birds were subsequently exhibited by His Royal Highness the late Prince Consort at the Metro­politan and other shows as Brahmas.

Of the origin of these birds it will be best to let Mr. Burnham tell his own tale. In his amusing and unscrupulous work, entitled ” A History of the Hen Fever,” published at Boston in 1855, he says :—

From A History of the Hen Fever

” An ambitious sea-captain arrived at New York from Shanghae, bringing with him about a hundred China fowls, of all colours, grades, and proportions. Out of this lot I selected a few grey birds, that were very large, and consequently very fine.

I bred these, with other grey stock I had, at once, and soon had a fine lot of birds to dispose of—to which I gave what I have always deemed their only true and appropriate title (as they came from Shanghae), to wit, Grey Shanghaes.

In 1851 and ’52 I had a most excellent run of luck with these birds. I distributed them all over the country, and obtained very fair prices for them; and, finally, the idea occurred to me that a present of a few of the choicest of these birds to the Queen of England wouldn’t prove a very bad advertisement for me in this line.

I had already reaped the full benefit accruing from this sort of ‘ disinterested generosity ‘ on my part towards certain American notables, and I put my newly-conceived plan into execution forthwith.

A Cunning Plan Worthy of Blackadder!

” I then had on hand a fine lot of fowls, bred from my imported stock, which had been so much admired, and I selected from my best ‘Grey Shanghae‘ chickens nine beautiful birds. They were placed in a very handsome black walnut-framed cage, and after having been duly landed by several first-rate notices in the Boston and New York papers, they were duly shipped across the big pond, addressed in purple and gold as follows :

The fowls left me in December, 1852. The Illustrated London News of January 22nd, 1853, contained the following article in reference to this consignment:—

From The Illustrated London News of January 22nd, 1853

By the last steamer from the United States, a cage of very choice domestic fowls was brought to her Majesty Queen Victoria, a present from George P. Burnham, Esq., of Boston, Mass. The consignment embraced nine beautiful birds— two males and seven pullets, bred from stock imported by Mr. Burnham direct from China.

The fowls are seven and eight months old, but are of mammoth proportions and exquisite plumage—light silvery-grey bodies, approaching white, delicately traced and pencilled with black upon the neck-hackles and tips of the wings and tails.

The parent stock of these extraordinary fowls weigh at maturity upwards of twenty-three pounds per pair; while their form, notwithstanding this great weight, is unexceptionable. They possess all the rotundity and beauty of the Dorking fowl; and, at the same age, nearly double the weight of the latter.

They are denominated Grey Shanghaes (in contradistinction to the Red or Yellow Shanghaes), and are considered in America the finest of all the great Chinese varieties.

That they are a distinct race, is evident from the accuracy with which they breed, and the very close similarity that is shown amongst them; the whole of these birds being almost precisely alike, in form, plumage and general characteristics. They are said to be the most prolific of all the Chinese fowls. At the time of their shipment these birds weighed about twenty pounds the pair.

” This was a very good beginning. A few weeks afterwards, the Illustrated London News contained a spirited original picture of seven of the nine Grey Shanghae fowls which I had the honour to forward to Queen Victoria. The drawing was made by permission of the Queen, at the royal poultry-house, from life, by the celebrated artist Harrison Weir, and the engraving was admirably executed by Smythe, of London. The effect in the picture was capital, and the likenesses very truthful. In reference to these birds, the Illustrated London News has the following:—

Grey Shanghae Fowls for Her Majesty 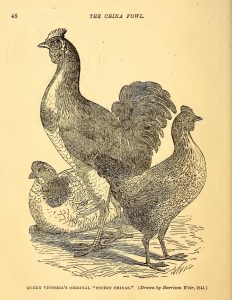 Grey Shanghae Fowls for Her Majesty:— In the Illustrated London News for January 22nd, we described a cage of very choice domestic fowls, bred from stock imported by Mr. George P. Burnham, of Boston, Mass., direct from China, and presented by him to Her Majesty.

We now engrave, by permission, these beautiful birds. They very closely resemble the breed of Cochin-Chinas already introduced into this country, the head and neck being the same ; the legs are yellow and feathered; the carriage very similar, but the tail being more upright than in the generality of Cochins.

The colour is creamy white, slightly splashed with light straw-colour, with the exception of the tail, which is black, and the hackles, which are pencilled with black. The egg is the same colour and form as that of the Cochins hitherto naturalised in this country. These fowls are very good layers, and have been supplying the royal table since their reception at the poultry-house, at Windsor.”

The receipt of these birds was graciously acknowledged by the following letter:—

Dear Sir: I have received the commands of Her Majesty the Queen, to assure you of Her Majesty’s high appreciation for the kind motives which prompted you to forward for her acceptance the magnificent ‘Grey Shanghae’ fowls which have been so much admired at Her Majesty’s aviary at Windsor.

Her Majesty has accepted, with great pleasure, such a mark of respect and regard, from a citizen of the United States.

I have, by Her Majesty’s command, shipped in the ‘George Carl’ to your address, a case containing a portrait of Her Majesty, of which the Queen has directed me to request your acceptance.

The portrait thus sent was that of Her Majesty in the robes of the Order of the Garter, and it was reproduced by Mr. George Burnham as the frontispiece to his book, in a style that was especially creditable to the Transatlantic wood engravers.