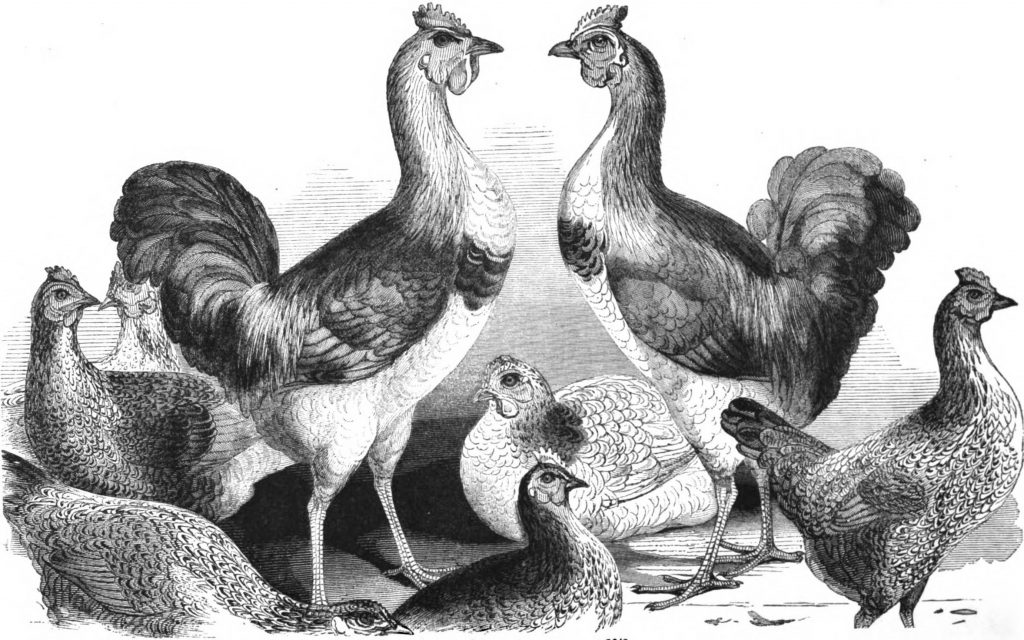 Both Queen Victoria and the Prince Consort Albert shared an interest in poultry and breeding chickens. Queen Victoria’s chickens were, of course, the epitome of the breed by definition!

This extract from the Poultry Book of 1867 states:

The conclusion of the Chinese war in 1848, when the northern ports, including Shanghae, were thrown open to European vessels, may be stated as being the period of the first introduction of these remarkable fowls into this country.

The date usually assigned to their importation is frequently some few years later, and there are several claimants to be regarded as the first holders of this variety; but the fact that a group of them belonging to her Majesty Queen Victoria were, under the name of Cochin-China fowls, represented in the accompanying engraving from the Illustrated London News for December 23, 1848, carries the period of their existence in this country back to, at least, some months antecedent to that date.

These, then recently imported, birds were described in the following paragraph:—

Queen Victoria’s Chickens from the Illustrated London News for December 23, 1848

It is, however, in the new fowl-house that the more and curious birds are kept, and to these—as the common sorts are well known—we shall confine our attention. The Cochin-China fowls claim the first consideration. These extraordinary birds are of gigantic size, and in their proportions very nearly allied to the family of bustards, to which, in all probability, they are proximately related—in fact, they have already acquired the name of the ‘ostrich fowl’

In general colour they are of a rich glossy brown, tail black, and on the breast a horse-shoe marking of black; the comb cleanly and neatly formed, with shallow serrations; the wattles double. Two characters appear to be peculiar to them—one, the arrangement of the feathers on the back of the cock’s neck, which are turned upwards; and the other, the form of the wing, which is jointed, to fold together, so that, on occasion, the bird may double up its posterior half and bring it forward between the anterior half and the body.

The eggs are of a deep mahogany colour, and of a delicious flavour. These birds are very healthy, quiet, attached to home, and in every respect suited to the English climate. They are fed, like most of the other fowls, on a mixture of boiled rice, potatoes, and milk.

There may be traced perhaps to the author of this, the earliest account of these birds, many of the ridiculous errors respecting them that gained a ready credence with the public in the early days of what was then known as the Cochin mania.

The suggestion that they were allied to the bustards, we need scarcely say, was entirely without foundation. 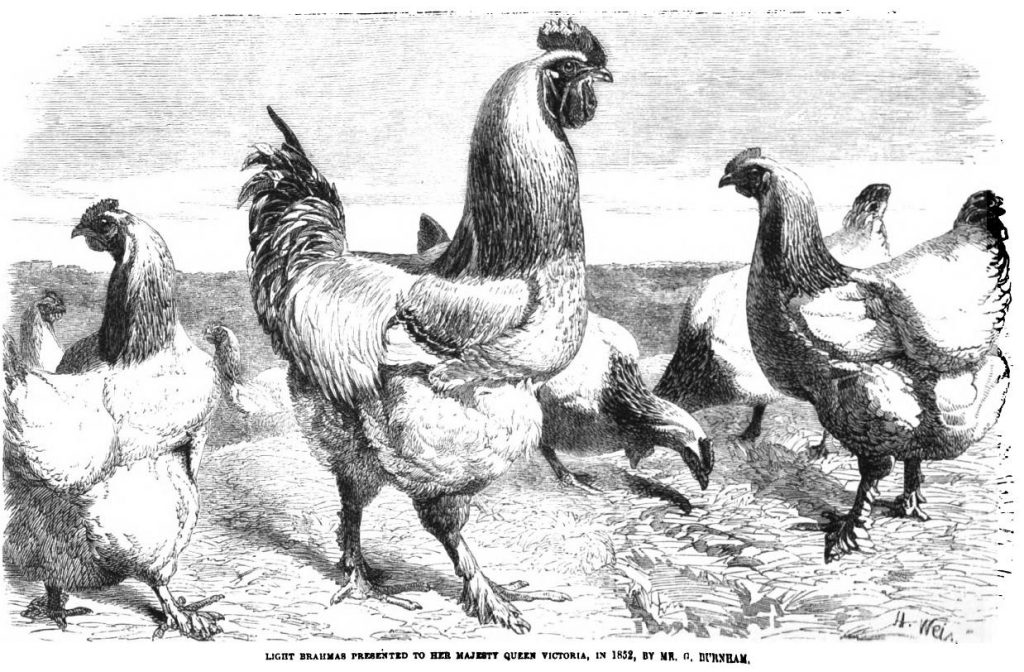 The light Brahmas undoubtedly originated in, or were identical with, those grey birds that from the very first importation came over from Shanghae with the buff and partridge birds now universally known as Cochins. But public attention was first called to them in consequence of an acute American fancier, Mr. George P. Burnham, presenting a consignment to Her Majesty; and these birds were subsequently exhibited by His Royal Highness the late Prince Consort at the Metro­politan and other shows as Brahmas.