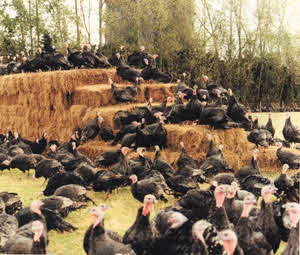 Registered Certification Bodies for Other Standards

Which Organic Poultry Standard to Follow? The prospective producer will have to decide which of the organisations to register with, and it is a matter of personal choice.

The Soil Association standards are the oldest and most widely recognised and many producers are attracted by the fact that, while listing all the UK Organic requirements, they also recommend principles that are more in keeping with the traditional small scale aspects of poultry keeping.

For example, they recommend small housing units with a maximum number of birds per house, as follows:

However, under certain conditions, the following are allowed by the Soil Association:

This contrasts with the UK Organic Standards that require the following maximum per house, and which many of the other bodies follow:

It should be added that under the UK Standards the latter flock densities are only allowed in houses that were built before 24 August 2005, and for producers who were registered before that date. The derogation was to have come to an end on the above date, but as it was felt that UK producers would be at a disadvantage when compared with producers in other EU Member States, DEFRA has extended the derogation date to 31 December 2010.

My own view is that all the existing standards fall far below the ideal.

Research indicates that chickens recognise each other on the basis of their head shape, and are capable of remembering 50-60 other birds in their own flock. (Fölsch. 1996. Quoted in Organic Poultry Production. Nicolas Lampkin. 1997).

This supports the traditional practice of having a maximum flock size of 50. When you realise that some organic flocks include thousands of birds, it’s not surprising that there are widespread problems of aggression. Some organisations also allow beak trimming if there is no other solution, although the Soil Association bans it. However, even their standards allow large numbers. Economic considerations have taken precedence over innate flock needs.

Those with very small flocks may not be able to justify the cost of organic registration, which can amount to several hundred pounds. Even if they are providing conditions that are far better than any of the recognised organic standards, they will not be able to sell their produce as ‘organic’.

The Soil Association has a scheme for several producers sharing the costs, if they are within the same area. Alternatively, the produce can be sold at the farmgate and simply not described as organic. A notice could be displayed to the effect that organic feeds are fed to the poultry and that they are kept humanely and allowed to roam outside on pasture. It will then be apparent to callers that the produce is organic in all but name.

The Wholesome Food Association is an organisation that was launched for the benefit of people who are only operating on a small scale and selling produce locally. Their principles are equivalent to, if not higher than any official organic organisation, and all members are expected to share them. There is no system of inspection, however, for as everyone is operating on a local basis, buyers who call to buy produce would soon detect if there were abuses. The association has branches in most areas of the country.