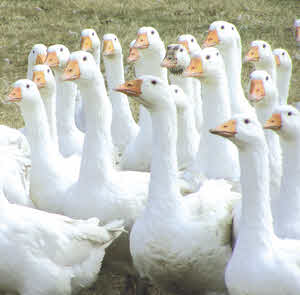 My old English teacher always stressed the importance of defining terms; otherwise, she would ask us gravely, how would anyone know what anyone else was talking about? So, it is prudent to follow her sterling example and start with some definitions.

Officially, the following birds are recognised as poultry and are therefore subject to regulation: chickens, ducks, geese, turkeys and guinea fowl.

There are three ways of describing what is meant by the term organic: the dictionary definition, the traditional definition as most people know it, and the legal one.

The dictionary definition is that it is a coordinated whole with various factors contributing to an organised body, where the connected and interdependent parts share a common life.

Those who have been organic before there was even a legal definition of the term understand that their activities are benign, humane and enhance the environment rather than damage it. They work on the following principles that have been defined by the International Federation of Organic Agriculture Movements (IFOAM):

When it comes to the production of food, the word organic also has a legal definition so that consumers may be assured that so-called organic produce has been produced in a humane way and by sustainable management that does not damage the environment. It applies to horticultural and farming methods, crops, foods, animals and poultry and there are two sets of regulations and standards that apply:

ACOS (originally UKROFS) interprets the European Union legislation for organic production within the UK. It advises the Government on organic matters and is responsible for research and development in the field. It also ensures that producers are certified as organic producers and are subject to inspection. However, the actual jobs of certification and inspection are put out to various organisations who must themselves be registered with ACOS.

This article is a shortened extract from Organic Poultry by Katie Thear and used with permission of the publisher.