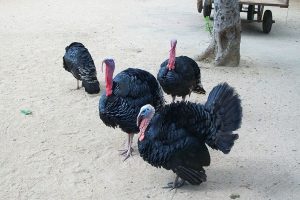 A once common turkey disease in turkeys it is now rare. It is caused by a protozoan parasite in the liver or caeca. It is usually picked up from land that has been previously grazed by chickens. The parasite is in the eggs of the caecum worm passed in the droppings of the chickens.

Turkeys that have access to ground previously used by chickens can pick up the parasite even several years after chickens have left the site.

Symptoms include lethargy, drooping stance, lack of appetite and yellow droppings. Prevention is the best policy, keeping turkeys well away from anywhere that has been in contact with chickens.

Blackhead is likely to kill young birds very quickly, so act at once if it is suspected. An antibiotic can be added to the water and should solve the problem.

This is normally seen in young birds, and results from a protozoan parasite picked up from droppings. Good hygiene is essential in maintaining clean dry litter, as the coccidia oocysts can be brought in on muddy boots. By the same token it is not advisable to run the birds on ground that has been previously stocked by turkeys, or which is particularly wet.

Unusual in small flocks, this is a disease that is soil-borne and can enter through damaged areas of the skin. It is common in sheep and pigs. Symptoms include listlessness; a swollen head, neck, joints and snood and there can be sudden death. This is a zoonotic disease transferable to humans, and the vet should be notified. Treatment is with antibiotics.

This is a dangerous and highly infectious disease that is rare these days and very unlikely to occur in a small-scale enterprise with a good hygiene regime. Symptoms include listlessness, loss of appetite, discharge from the nostrils and diarrhoea, quickly followed by dead birds.

It can be contracted through the drinking water so it is important not only that the turkeys always have fresh water, but that the water containers are always kept clean.

This turkey disease has been practically eliminated from the UK through a nationwide vaccination programme. It can occasionally crop up so it is still advisable to know about it because it is a very serious illness.

Aspergillosis fumigatus fungus is the cause of this disease. It is found in mouldy litter, hay or feed. When the spores are inhaled the fungus grows in the lungs. Young birds are most at risk. Poor brooder and hatchery conditions can cause it, hence the common name of ‘brooder pneumonia’. Humans can also be affected when it is called ‘farmer’s lung’. Symptoms are gasping and rapid breathing. Anti-fungal treatments are available but they are expensive. The best approach is prevention.

Commonly known as bird ‘flu, this is caused by a virus and is normally carried by airborne particles from the respiratory tract, as well as by bird droppings or people carrying it on their feet or equipment. This is why it is a good idea to have a container with antiseptic liquid and a brush for cleaning boots or equipment before entering the turkeys’ area.

Virulent strains such as H5N1 are killers and must be notified to the authorities. If birds start to die, contact the vet immediately. As is the case with all livestock or pets, it is advisable to wash your hands immediately after handling turkeys whether they are healthy or not.

This is a respiratory bacterial infection (Mg), that is highly infectious but rarely fatal. Symptoms are a discharge from the nostrils and eyes, and coughs and sneezes. Mucus can sometimes be observed on a wing where the bird has wiped its eye. Poor ventilation in the turkey house provides suitable conditions for an outbreak. The vet will advise on the best treatment.

There are many strains of salmonella in poultry, several of which can infect turkeys. Young poults are particularly vulnerable. They become listless and have no appetite for food. Prevention is the best option; buy poults from a reliable source and practise strict hygiene.

This article is a shortened extract from Starting with Turkeys by Katie Thear and used with permission of the publisher.