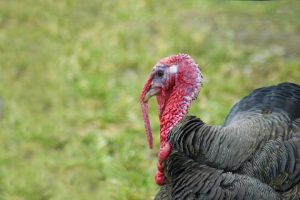 Introduce the sexes about a month before laying begins. This is the time to change the diet over to breeders’ pellets, if they are not already on it. It will ensure that there are no deficiency diseases to be passed on to the progeny.

Provide them with a good quality ration and fresh water with access to insoluble poultry grit at all times.

Once breeding begins, rotate stags each week, returning the removed one to a pen by himself.

Careful checking of egg fertility should soon show whether a stag is worth using or not. Bear in mind that fertility and hatchability are not the same thing.

Fertility is indicated by whether an egg is fertile when candled over a bright light. Hatchability is whether it eventually hatches. Both are expressed as percentages, with the higher ones being indicative of good breeding stock.

A breeding flock does not have to be kept inside. They can be out in a protected yard or on pasture during the day and are much better for being so. Place their feed in an area to which wild birds do not have access.

Covered feeders with an enclosed unit from where the turkeys can trigger a small amount of feed at a time are suitable. Water containers need to be raised above the ground on a plinth, to keep contamination to a minimum.

Depending on the scale of the enterprise, either a system of flock mating or of pen mating will be used.

With a big breeding flock, flock mating can be practised. This is where a large area of ground is available so that several stags can be run with the females. It should be emphasised that it is only a practical proposition on a field scale, where the space is sufficient to allow the stags to form their own breeding sets, without the risk of fighting.

On a smaller scale, pen mating is more appropriate and more accurate records can be kept.

An indoor or barn pen used for mating should have plenty of light and ventilation or be near to the open air as the turkeys need these conditions. Fertility is also directly affected by the amount of light.

The pens need to be at least 1.2m high. If the birds are particularly flighty, or have not had one wing clipped, it may be necessary to increase the height to 1.8m. If two pens are adjacent, the first 90cm should be of solid material to prevent stags from each pen trying to fight. It is a good idea to have two pens and alternate the birds each month to provide an opportunity to clean one out and give that area a rest. The floor of the breeding pen should be wood shavings or clean chopped straw.

Perches or straw bales should be no higher than 45cm from the ground. Nest boxes can be placed along the shadiest side of the pen. A nest box should be at least 45cm x 45cm x 60cm high. As well as individual nest boxes, you could provide larger communal nest boxes because turkeys will accept them and they may be better able to spread themselves out.

Stags mounting turkey hens can cause damage with their claws, tearing the skin of the hen and causing nasty wounds, although this is more likely to occur with the heavier breeds. For protection, the hen can be fitted with a canvas mating saddle. This fits over her back and sides without restricting her wings.

The stag should also have his claws clipped and spurs filed. The protective process continues throughout the egg laying period, with each successful mating fertilising 10 to 12 eggs.

As referred to earlier, large commercial breeds may not be able to mate normally, so artificial insemination will be needed, although it is not advised for the small scale breeder of traditional breeds. Semen can be collected from the stag two to three times a week and transferred to the hens within half an hour as it degrades quickly. One insemination will remain effective for two weeks.

It is emphasised that the technique should only be attempted by those who have undertaken a practical course in the procedure.

This article is a shortened extract from Starting with Turkeys by Katie Thear and used with permission of the publisher.