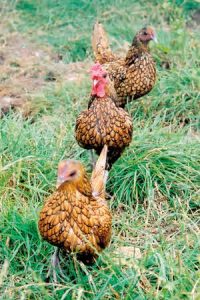 An extract from the book Starting with Bantams by David Scrivener published by Broad Leys Publishing Ltd. This excellent book is written by an experienced bantam and large fowl poultry breeder and show judge.

Hens like to lay when they see an egg. (Traditional saying)

So, you buy a trio of bantams and breed some more from them. What next? Most people have heard of ‘in-breeding’, ‘line breeding’ and similar terms but have only a hazy idea of their meaning. Also, societal taboos of incest are carried over into livestock breeding, not necessarily appropriately.

In-breeding or maintaining a closed flock keeps a high level of genetic uniformity. You pretty much know what you are going to get from a closed flock: more of the same. Following the old engineer’s saying, “If it ain’t broke don’t fix it!”, successful exhibitors are reluctant to introduce unrelated stock into their strains because they fear, correctly, that although the birds so bred may be more vigorous and fertile than their in-bred birds, they will be much less perfectly marked or much too big to be an acceptable show bantam.

In-breeding depression or in-breeding degeneration is the inevitable result of many generations of close in-breeding. It is where there has been a great deal of mating between close relatives.

Most breeders of Sebrights, for example, have to contend with poor egg production and fertility, and the few chicks hatched are very delicate. But, a Sebright is a very precise bird. The lacing of the feathers, the comb, and the size and type of the bird all have to be correct, otherwise it is not worth having.

Luckily, some European bred Sebrights are now available here, so our breeders at last have some suitable fresh stock to use. Even so, I am sure they will wing-tab and/or leg-ring all chicks very carefully so they know which are original strains and which are from the new stock.

Most of the harmful genes causing problems are recessive, as distinct from dominant. In other words, they tend not to manifest unless they are inherited from both parents. In populations where birds (or animals or people) which are not related are producing young, then it is very bad luck indeed if a mating pair has the same harmful, recessive genes.

The harmful genes of each parent are usually prevented from operating by the good, dominant genes of the other. In closed populations there is a greatly increased risk that both parents will be carrying the same harmful, recessive genes (but masked and therefore undetectable), thus producing 25% with the faulty genes operating, and a further 50% with a single faulty, recessive gene to carry on to future generations.

Closed flocks can be perpetuated for an extended period – even decades or more – by keeping as large a flock as possible, and with good organisation, taking care to mate cousins rather than siblings.

In an ideal arrangement, as might be employed by a commercial operation, there would be six or eight breeding pens of a strain, with the cockerels from pen A being bred to the pullets from pen B, and so on.

Hobbyist breeders will usually have to make do with three or four pens, and keep as many cockerels as possible in order to maintain as wide a genetic pool as possible within the strain. This is why most of the famous names in our hobby are specialists. They understand why it is necessary to keep a large flock of nearly identical birds. This is often lost on beginners who, after visiting an expert, are probably thinking,
“That was a bit boring. I’d rather have lots of different kinds, with just a few of each”.

Line breeding is a form of in-breeding where maximum use is made of one outstanding individual. The rotational mating of a large, closed flock is what is necessary to keep a very good strain going.

You will gradually be building up the numbers so that by the time the original champion goes off to the great free-range in the sky, you will have enough birds to switch to the rotational system above. This, with careful selection and some luck will be the foundation of a succession of future champions.

The aim of breeding for the shows should not be a Holy Grail style quest for the perfect specimen, but rather many years of regularly being ‘in the cards’ at the shows.