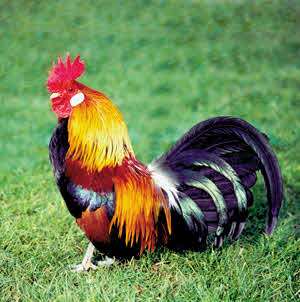 Breeding Bantams – From Starting with Bantams By David Scrivener

An extract from the book Starting with Bantams by David Scrivener published by Broad Leys Publishing Ltd. This excellent book is written by an experienced bantam and large fowl poultry breeder and show judge. This part of the article covers out-breeding bantams, upgrading and cross-breeding.

Out-breeding or out-crossing is where very unrelated strains are bred together. It may be done to rejuvenate an overly in-bred strain, as illustrated in the Sebright example referred to earlier. In this case, after the outcross, it is then back to in-breeding as normal for the next few years. Where the production of utility birds is concerned, it will be used regularly.

If you were thinking of producing ‘laying bantams’ for sale, most likely with Araucanas, Marans, Welsummers or Welbars, then the best method would be to develop two separate in-bred strains of whichever breed it is. The productive layers would be strain crosses between these two lines. This is the method used to make commercial ‘hybrids’.

Maximum hybrid vigour is only obtained in F1 stock from in-bred parents. (F1 stock is a hybrid strain from the careful crossings of pure-bred parents of the same breed, giving uniformity and vigour). Quite a large scale operation is needed to do this properly, with very careful record keeping so that the parentage of every egg and chick is known. This is why no-one, as far as I am aware, produces utility bantams.

Upgrading has most often been used in ‘third world’ countries to improve indigenous stocks, in so far as the local climatic and disease conditions allow. Highly productive American and European poultry (or other livestock) often sicken and die in the tropics, but crosses of three-quarter breds with local breeds give a practical compromise between productivity and survivability.

For hobbyist poultry keepers, this process is used as an emergency measure with nearly extinct, rare breeds. In the 1960s, poultry breeder Rex Woods bought most of the surviving large Spanish and crossed them with Minorcas. This was followed by more back-crosses to Spanish, to produce a vigorous population of nearly pure White-faced Spanish.

Cross-breeding is the mating of one pure breed with another. It is not normally done in bantam breeding, unless in an emergency (as with the Spanish example above), or when a new breed is being made. As there are already more than enough recognised varieties for the world’s bantam breeders to keep going, it is not something that is generally advocated. In many cases, there is no point as it is highly likely that the breed clubs would not recognise a new creation.

There are a few varieties of bantam which would be acceptable as they already exist as large fowl, but have not yet been bantamised. Examples to consider include Cuckoo, Dark, Red and White Dorkings, Gold and Silver Campines, Ixworths, La Fleche or Modern Langshans.

In the case of the Dorkings, the initial cross would be between under-sized large Dorkings of whichever colour is to be made, and Silver Grey Dorking bantams, the only colour currently existing. After about five years of breeding many, and just breeding from the best, the result should be reasonable but not yet perfect specimens.

The same process, one or two initial crosses followed by years producing large numbers of chicks from which only a small proportion will be used for breeding, will be used for the other suggested ‘new’ breeds. In all cases, one parent will be the smallest available specimen of the large breed. For the other parents, I suggest Brakels and Pencilled Hamburghs for Campines, White Sussex, Jubilee Game and White Ko-Shamo for Ixworths. For La Fleche, use Black Minorcas first, followed by Black Rosecombs. Rosecombs are too small to mate with a large La Fleche.

In the case of Modern Langshans you may not be able to find any large ones, so start with a Croad Langshan bantam x Black Modern Game mating.

As all these projects involve producing a lot of unwanted birds, be prepared to eat a lot of cockerels, and have a lot of cross-bred pullets to sell as layers.

The genetics of poultry will have to be studied in depth. You will need an up-to-date book, for much has been discovered recently. Dr Clive Carefoot, in particular, has proved that a lot of the old text books were wrong on the partridge, pencilled and double-laced patterns.