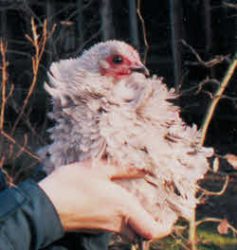 Bantams are smaller birds than the large fowl. Some are naturally occurring bantam breeds, such as Pekins and Sebrights, for which there are no counterparts amongst large fowl. Others are miniaturised or bred-down versions of large fowl. They all have their breed clubs and there are sets of Standards for them.– By John Harrison based on work by Katie Thear & David Scrivener (used with permission)

They are popular with children, show enthusiasts and those with smaller gardens, although it should be remembered that bantam cockerels have a particularly shrill call if there are close neighbours. Some bantams are also useful as broody hens for incubating the fertile eggs of other breeds.

Although the fertility and productivity of many large pure breeds have declined, there is evidence that some bantam strains have not been affected to the same degree. For the small, household flock, bantams may therefore be the best choice for supplying the family eggs, as long as they are utility breeds, as referred to earlier. Bantams, being smaller birds, do lay smaller eggs though.

The members of the Araucana Club can hardly keep up with the demand for this breed. It is their unusual blue and green shelled eggs which attract all the interest. They originally came from South America, mainly Chile. There are two types, tailed and rumpless. Both are in large and bantam versions, all in several colours.

A smart utility type, the Australorp always looks neat and tidy, even if it is not the most colourful breed. The main variety is glossy greenish-black and a few blues are now available. They are good layers of nice tinted eggs. 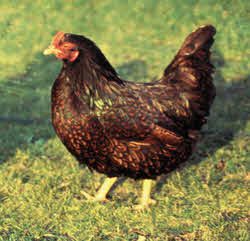 Another smart utility breed, this one originated in the Barneveld district of the Netherlands. Large Barnevelders lay very attractive brown eggs, but the bantam eggs are seldom as dark. It would be useful to go to a breeder to buy these so you can see examples of the eggs while you are there.

Virtually every poultry keeper knows of Cuckoo Marans and their dark brown eggs. Perhaps fewer know that they are available as bantams as well. Not all of the bantams are as good in egg colour as the large, so it is best to visit the breeder so you can see the eggs being produced for yourself. Like their bigger relations these are easy to keep in a wide range of housing systems. 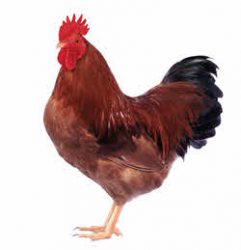 These were covered by the Rare Poultry Society until 1997, when their popularity, which had been steadily rising for the previous ten years, reached the level for a separate breed club to be a viable option. The New Hampshire Red Club is still quite small but very active and growing fast. Club members are struggling to keep up with the demand for both large and bantam New Hampshires. This very attractive chestnut-red breed, with contrasting black tails, is everyone’s idea of a traditional farmyard chicken and they are especially popular with new poultry keepers.

Quite large bantams, Orpingtons look even larger than they really are because they have a thick coat of feathers, which gives them a very rounded, matronly appearance. They do not have feathered feet but the body feathers are very close to the ground so they should never be allowed out in muddy conditions. Being very quiet and docile birds they are a good choice for anyone who has never kept poultry before and is a bit nervous with livestock.

Orpington hens are good broodies and gentle mothers. Four self colours are standardised, which in order of popularity are Black, Buff, Blue and White.

Another American breed, this is probably one of the best known poultry breeds to people who don’t know anything about chickens. Most people are surprised to find that they are a much darker colour than they were expecting, a very deep and glossy chocolate-red.

As with the Rhodes, nearly everyone has heard of Light Sussex. Very few know of the other six colours. As the name suggests, it is very much a British breed. Large Sussex were one of the main breeds traditionally kept on farms, and in their smaller way, Sussex bantams are just as useful, laying well, hatching their own chicks and the cockerels are big enough to eat. 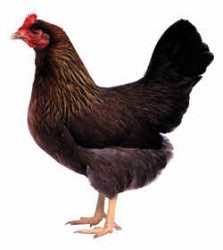 Named after the Dutch village, Welsum, these are the ultimate traditional farmyard breed. Very dark brown eggs coming from prettily patterned birds makes this one of our most popular breeds. Many beginners choose them, and they are wise to do so. They are best kept in houses with large grassy runs as they are active birds which need exercise.