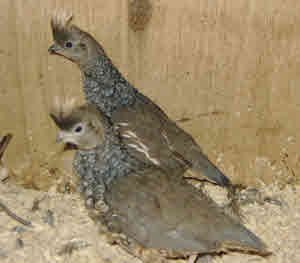 In addition to the normal and coloured varieties of Coturnix laying quail, there are other Coturnix Quail breeds that are often kept as aviary birds, rather than as producers.

The Chinese Painted, Asian Blue, King, or Blue Breasted quail, Coturnix coturnix chinensis, is the smallest of the quail breeds, with the male reaching 12cm (4.5in) and the female 13cm (5in).

In appearance it is compact and round, with a mouse-like way of scuttling about. The male is far more colourful than the female, with a brown and blue flecked back and crown. Breast and tail feathers are reddish brown, while the chin and throat have distinct black and white striping, like a smart crescent collar.

The female is less flamboyant, with an overall mottled brownish hue from the fine black and white specks. Her back is slightly darker than her abdomen. She has a white patch on the throat but no barring. In both sexes the beak is black and the eyes are brown.

The Chinese Painted quail is probably the most widely kept of the ornamental aviary breeds. It is arguably the prettiest and most colourful, and in recent years has been much utilised as a spider catcher in butterfly houses.

Anyone who has ever visited one of the increasing number of butterfly breeding establishments, such as that at Syon Park in Middlesex, will have seen these busy little birds scuttling through the ground vegetation of the greenhouses, beady eyes on the lookout for unwary spiders.

Found in China, India, Sri-Lanka, South Africa and Australia, there are around ten sub-species of the Chinese Painted. They are all similar but with slight variations. Many are now rare. They include the following: