Feeding fodder crops, usually wheat or barley, to poultry and to ruminants is enjoying a surge in popularity at the moment. It’s often touted as a new idea but feeding grain fodder has been common farming practice for many years. It’s referred to in Henderson’s The Farming Ladder which was published in 1943. The reference is such that he obviously thinks it was an established normal farming practice. 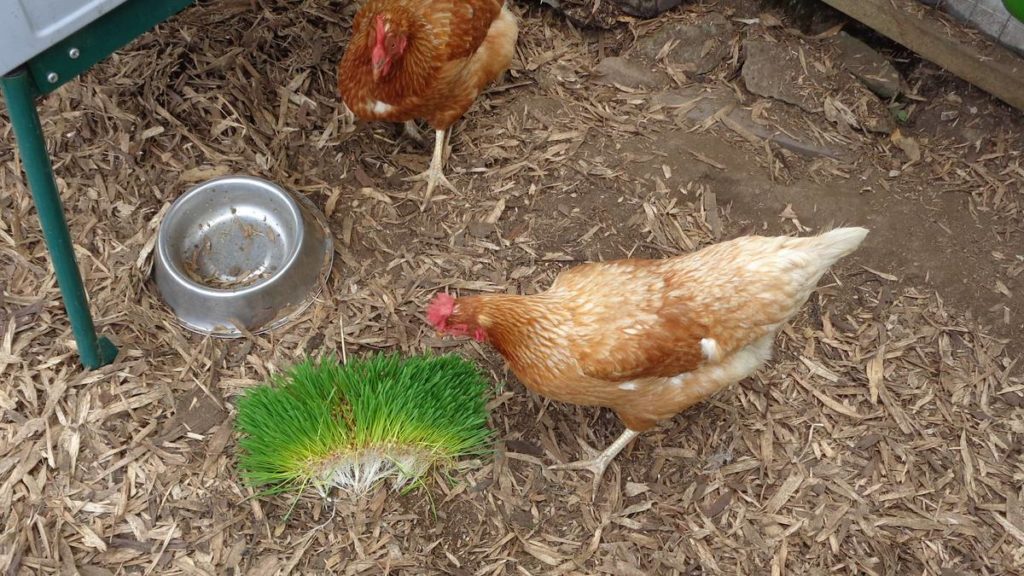 What is Sprouted Grain Fodder

The idea is simple; the grain is sprouted for a week or so without soil and then fed to the livestock who eat the shoots and leaves.

The benefits claimed are that the sprouted grain is more nutritious and more easily digested thereby giving more value to the grain. According to Wikipedia wheatgrass has a similar nutrient level to broccoli, so the grass combined with the grain is certainly equal to that.

Whilst there is a distinct lack of unbiased scientific information on the benefits of feeding fodder, in 2017 Farmers Weekly reported on a study of laying hens fed a mix of sprouted seeds in a trial at Duchy College, Cornwall, It showed increased egg production with 25% less overall feed.

The study found that the optimum is to provide 50% of the feed as fodder with the other 50% made up from standard layers pellets.

The other benefit of sprouted grain is that it provides green food. In the summer our hens have the benefit of a variety of greens; bolted lettuce, cabbage and cauliflower leaves, weeds including chick weed, dandelion and fat hen, herbs and grass.

In the winter fresh greens are not so easy to come by. Pasture can quickly be turned into bare earth and mud and below 5ºC grass isn’t growing but grains can be sprouted indoors or undercover in a greenhouse, polytunnel or shed etc.

How to Grow Sprouted Grain Fodder for Hens. 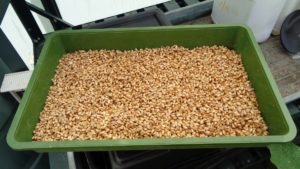 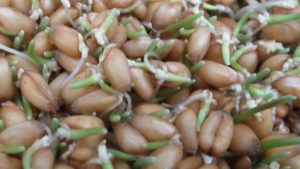 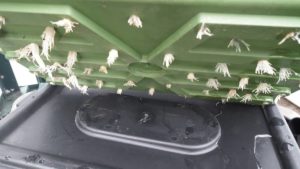 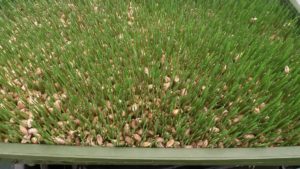 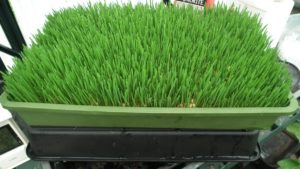 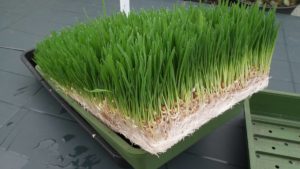 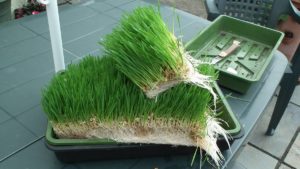 As I write in mid-summer the chickens have plenty of greenery to go at and the grass is growing so I don’t want to do any more than prove the concept and test the method. This is how I grew fodder wheat for hens.

We feed the hens wheat grain as a ‘scratch’ to give them something to occupy them when the weather keeps them undercover. It’s cheaply available as a poultry feed from farmers supply stores. Don’t bother asking for seed wheat – they only seem to supply that by the tonne!

I took an ordinary seed tray and filled it to about 2 cm (¾ in.) depth with wheat grain. This weighed 675 grams. I then soaked it in ordinary tap water at room temperature for 12 hours.

The grain had swollen and weighed 968 grams when returned to the seed tray. The seed tray was placed in the greenhouse on a lower bench shelf. It was shaded from direct sunlight but still in light. The tray was also sloping on a drip tray so water could run out easily.

Twice each day the tray was sprayed with tapwater using a sprayer attached to the hosepipe. I’ve read some articles suggesting that the water should have stood for 24 hours to allow chlorine that is used to keep tap water sterile to evaporate. I think the tiny amount of chlorine in the water most likely is helpful, deterring moulds and fungus from developing.

Small white sprouts started to appear the next day and most of the grains had sprouted by the second day. The grain became more swollen and had completely filled the tray after 5 days. At this point there were roots growing out of the holes in the base of the seed tray.

By day 8 the green shoots were about 10 cm (4 ins.) high and the roots had bound together the grains into a fairly solid mat that was difficult to pull apart. The fodder now weighed 2.85 Kg. It had over quadrupled in weight and was ready to serve.

There was far too much to give the 4 hens in one go so it was cut up into 8 portions. Initially the hens treated it with great suspicion but after a few minutes one tried it and started eating which was the signal for everyone to move in and start eating.

I continued to soak the fodder twice a day but by the fifth day of feeding the hens were becoming bored with it. They do have access to pasture so they get green food in the form of grass shoots and weeds anyway. If they didn’t have any pasture to eat I think they’d eat the fodder for lack of anything else green.

For the backgarden keeper fodder crops enable them to supply green food all year round to their poultry. By using a different grain like barley or producing fodder from dried peas which can be bought cheaply from some suppliers, their interest can be maintained.

Next time I will use half size seed trays and only put a layer 1 cm thick on the base. By using some racking and layering the trays over a collection tray it is easy to grow fodder indoors.