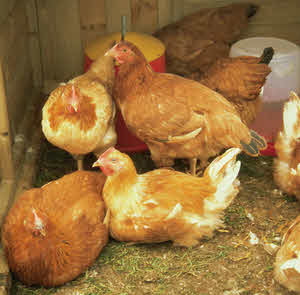 Problems of aggression may be specifically related to cockerels but feather pecking is a habit that females may also indulge in and often the pecking order in hens can cause the back garden keeper some problems. There are many factors that play a part in aggressive behaviour and it is appropriate to look at these in turn. – By Katie Thear

The pecking order is a well-defined hierarchical pattern of behaviour that manifests in flocks. There is a ‘top bird’ to which the rest will defer, often giving way at the food container or generally getting out of the way.

The top bird is often a cock, but in the absence of a male, an old hen may hold the position. She may continue to hold sway even if there is a male, if he happens to be young and nervous.

The pecking order extends downwards (just as it does in human societies), with the weakest having to survive as best as they can, dodging the onslaughts of the more powerful.

The pecking order may also extend sideways, with a previously untouched bird being attacked if, for example, it becomes ill or sustains a wound that attracts the unwanted attention of the other birds.

Introducing New Hens to the Flock

Where new birds are introduced to an existing flock, there are always problems because the natural pecking order is disrupted. A hen spotting a newcomer will utter a single warning croak that alerts the rest of the flock. It then becomes fair game to peck at and chase away the stranger.

Traditional advice has always been to avoid mixing flocks, not only because of the pecking order but also to avoid the possibility of disease transference. If it is absolutely necessary to introduce new birds to an existing flock they should be penned in a temporary area next to the run so that they can be seen but not harmed.

It will be necessary to have a separate shelter for them during this period, which may be around 1-2 weeks. Placing the food for each set of birds on either side of the boundary is quite effective because it has them in close proximity, feeding rather than sparring, and all the time getting used to each other.

Once the birds are taking each other for granted, they can be amalgamated, but a careful watch needs to be kept for potential problems.

If there are still difficulties, a programme of disorientation can be introduced. This is where the original flock is put in the temporary run, while the new birds are put in the original quarters. I found this technique very effective some years ago, when introducing Marans to a Rhode Island Red flock. Because of the changeover, they were all in new conditions and adapted accordingly.

If there is a particularly aggressive hen, it may be a good idea to separate her and put her in a temporary pen where she can be seen by the rest of the flock. I once had to do this with a Light Sussex matriarch who was really throwing her weight around, particularly towards my Silkies. It was extraordinary how quickly she adapted and was reintroduced successfully after only three days.

In most commercial flocks, birds are beak-trimmed so that they are less able to do damage to each other. The procedure is to trim the pointed tip of the upper mandible of the beak and is normally done before young birds are sold. I dislike the practice because, although it does stop pecking damage, it also means that the bird is unable to snip off the tips of young grass shoots or glean effectively on range.

It should be noted the law here is changing:

The ban was put off on the advice of the Farm Animal Welfare Committee (FAWC) because of its concerns about feather pecking and cannibalism who said that the ban should be deferred until it could be demonstrated reliably under commercial conditions that non-beak-trimmed laying hens could be managed without a greater risk to their welfare than that caused by beak trimming itself.

Something the author would not have agreed with.- John Harrison

There are plastic bit rings available. The ends of these can be clipped into the nostrils of the beak so that the rest of the ring is in the hen’s mouth. In this way, the beak cannot be completely closed, although eating and drinking are still possible.

Again, I dislike anything that affects normal behaviour, although I can see the value of using a bit ring temporarily until the aggressive pecking habit has been broken. I would be against using it as a permanent measure.

I should add, however, that I have never used bit rings, but I was interested to hear from someone who has. He fitted them to some of his Lakenvelders and Welsummers and found that the birds soon got used to them.

At first, all was well and he was delighted with the re-growth of feathers on the attacked birds, but after eight days a canny chicken worked out how to get round it and reverted to her bad ways. “She discovered that a beak bit is no problem when presented with an eighth of an inch thick emerging feather shaft. I now realise that if a bird is unable to use the tip of its beak because it is fitted with a bit to prevent total closure, it simply uses a deeper bite and uses the ring itself as a substitute upper beak.”

Who says that chickens are bird-brained?

Further Articles on Aggression in Poultry