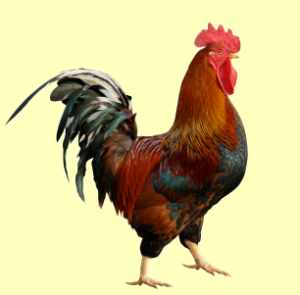 While the pecking order includes males and females, the males tend to be more aggressive in the breeding season. Their aggression also tends to be towards other males, or those that are seen to be interfering with their flock.A common complaint from poultry keepers is about their aggressive cockerels. – By Katie Thear

Affects on the Poultry Keeper

Their aggression may be directed at the unfortunate poultry keeper going out to feed them.

If breeding males are kept together, as they are with some flocks, it is necessary for them to have their own females as well as a considerable ranging area. This enables escape routes and territorial boundaries to be established. These may be invisible to human eyes, but not to the birds.

Note for Breeders of Poultry

It’s worth mentioning here, that if different breeds are run together but are to be bred from as pure breeds, it will be necessary to separate the breeds and keep them apart for at least three weeks before taking eggs for incubation. This is because the sperm can remain viable in the oviduct for up to 21 days.

Differences in Temperament of Poultry

We all know of the really friendly and gentle old cockerel that would never hurt anyone. Our old Cuckoo Maran male was of this order but there are also some pretty aggressive ones, too. We once had a White Crested Black Poland male that would fly at you if you went anywhere near him. I tried every trick in the book, but eventually had to get rid of him because nothing worked. It really was a case of ‘buyer beware’ because, although I warned the new owner of his aggressive tendencies, he was still determined to have him.

Weapons of the Cockerel and Dangers

The main weapons of the cock are of course, his long sharp spurs. In cock-fighting days these were prized and often lengthened with the addition of deadly metal spurs.

They have no function in a breeding flock because the sides of the hen can be ripped during mating and they are best kept trimmed. The earlier this is done the better, because they harden quite quickly.

Regular trimming will control the growth and ensure that there is no sharp tip. With an older male, it is usually necessary to soften the spurs with vegetable oil over a period of several days and then just trim the tip. As the softening process continues, more can be trimmed back, but it is important not to cut too much at a time otherwise it will bleed. Incidentally, there is no truth in the old myth that trimming the spurs affects fertility

Aggressive males can be dangerous to small children who are, after all, nearer their level than adults, so they need to be confined securely.

With adults, they tend to attack the legs so wearing a good pair of Wellingtons is advisable. When about to attack, the cockerel has a similar pattern of behaviour to his pre-mating routine. He utters a rather strangled croak, takes a few sideways steps and then flies up, raking your legs with his spurs.

One defence is to emulate his behaviour by taking a few sideways steps yourself, stamping your feet and uttering a louder croak. It has been known to work, although not with my Poland.

Anyone watching you can be forgiven for thinking that you have taken temporary leave of your senses, but you can always explain that you are involved in a scientific experiment. They may believe you!

Dealing successfully with Aggression in Poultry

Dealing successfully with aggression impresses upon the attacker that you are at the top of the pecking order. Once this is established, he will tend to give way.

Another tip is to press down on the back of the bully (male or female) to bring about a squatting position. If done in sight of the rest of the flock, it represents ‘loss of face’ although I may be guilty here of apportioning too much intelligence to chickens.

Throwing a bucket of water over the culprit, or using a water pistol, has been known to succeed but I would not be in favour of doing this in cold weather for humanitarian reasons.

Further Articles on Aggression in Poultry