Guinea Fowl in the Back Garden – Keeping Guinea Fowl 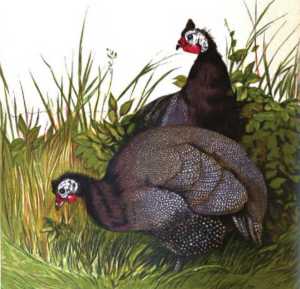 A Brief Guide on Keeping Guinea Fowl By John Harrison

“Those who wish to commence keeping these birds will do well to procure sittings of egg from one, or still better, two different stocks, so as to lessen the chance of close interbreeding, and to hatch them under common hens; by doing so they will establish a flock with far less trouble than by buying mature birds, whose restless, roving disposition renders it difficult to attach to a new locality.”
From The Poultry Book, published 1867

Keeping Guinea Fowl in the Back Yard

Guinea Fowl are a “love it or hate it” kind of bird, with prehistoric looks, excellent flight abilities and a temperamental personality.

This means there are divided opinions in the poultry keeping community as to whether they make a suitable back yard bird or should remain a game bird in wilder habitats. They do require space and due to their habits are not really suitable for small gardens.

However, for those who are intrigued by their unusual looks and enticed by their tasty eggs and meat this guide tells you how best to keep Guinea Fowl either on their own or alongside a flock of chickens, ducks, turkeys or geese.

Origins of the Guinea Fowl

Guinea Fowl can still be found in the wild in large flocks and are considered to be a good game bird with a fine meat flavour a little stronger than chicken, but with a similar texture. The bird itself originated from West Africa and started being imported into Western Europe in the sixteenth century mainly for the table, as even now the eggs are not widely available despite their rich taste.

These are the guard dogs of the poultry world. If strangers or strange animals enter the area they will let their owners know about it with loud calls. This can be a useful trait if you keep along side other poultry as they will alert you to fox intrusions or human strangers but may cause problems in built up areas, as their call is loud this may be considered a nuisance by some.

There are mixed opinions on the temperament of the Guinea Fowl with owners in the past having found them to not cohabitate well with other poultry and to be territorial and occasionally to attack when entering their runs.

However, as more people begin to keep them it seems that they are not as temperamental as once thought. With careful introduction over a period of weeks with separate yet visible runs guinea fowl can be introduced to existing poultry flocks without incident.

It is also the case that with handling from a young age the birds are not aggressive with humans so careful selection of your birds if they are already adult to make sure they have been well handled will prevent any problems.

Obviously if you were to raise from chicks you would be able to handle them and integrate them with your existing flock easily.