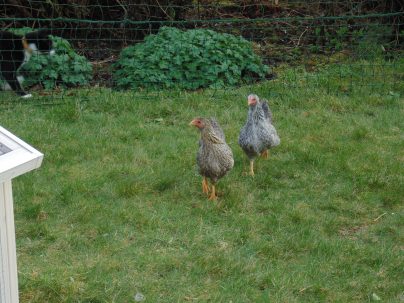 It may surprise you to find that chickens can be unhappy but they can. Just as the dog has something of the wolf in his background, so the hen has her life in the jungle in her background.

Chickens in the Wild

Her behaviour is profoundly influenced by that program that kept her alive in the past. Naturally she would live in small flock with cockerels on the forest floor, shaded by the trees and scrub from strong sun and aerial predators.

Picking her food from the floor and laying her clutch of eggs under a bush where she could sit hidden and undisturbed until they hatched. Roosting at night in the lower branches

Chickens can get bored if there is nothing for them to do and often show this by pecking at each other. Providing some interest in their environment like logs or straw bales to provide different heights, hanging CDs on string just above head height and hanging greens for them to peck at will cure the problem.

Providing shelter they can hide under helps them stop being nervous when they feel threatened from the sky as well as shelter from sun and rain. Some large bushes or fruit trees in their pasture provide the psychological comfort that they crave. Remember chickens are creatures that naturally live on the jungle floor and roost on the lower branches of the trees. A grassed orchard is a good habitat for hens.

Even a couple of pallets forming an inverted V will give them something to dash under if they think an eagle is about to swoop down on them.

Commercial flocks, even free-range commercial flocks can have hundreds or even thousands of birds. Hens like to form themselves into a pecking order where they know each other and their place.
However, they can only keep so much in their little brains. They can recognise and remember 50 to 60 other birds in their own flock. So a flock size larger than 50 birds has been shown to increase stress and fighting. I would suggest better to have a number of smaller flocks than one huge mass of birds because of this.

Incidentally, organic standards allow the keeping of 2,000 laying hens in the same house. No wonder aggression in commercial flocks is so endemic that the vast majority of non-organic flocks have the birds beak-trimmed.

As well as pecking and scratching in the dirt, hens like to make themselves a dust bath. Chickens love to dig themselves a shallow bowl in dry soil and will spend hours lying in them (as if they’re dead!) occasionally flapping their wings to knock more ‘dust’ into their feathers. It is a natural behaviour to rid themselves of parasites.

Yes, we have more effective ways to sort out parasites such as lice but this was an important natural behaviour

Why keep your chickens happy?

Technically it’s called allowing them to express natural behaviour but I think keeping them happy is a better way of putting it. As to why to do it, well it will reduce aggressive behaviour but it won’t make much difference to productivity.

Keeping your hens happy reflects more on us. Do we treat them as some sort of egg making machine with efficiency and profit as the only factors that matter or do we respect they are living creatures who deserve our thanks and respect for the gift they give us as food.