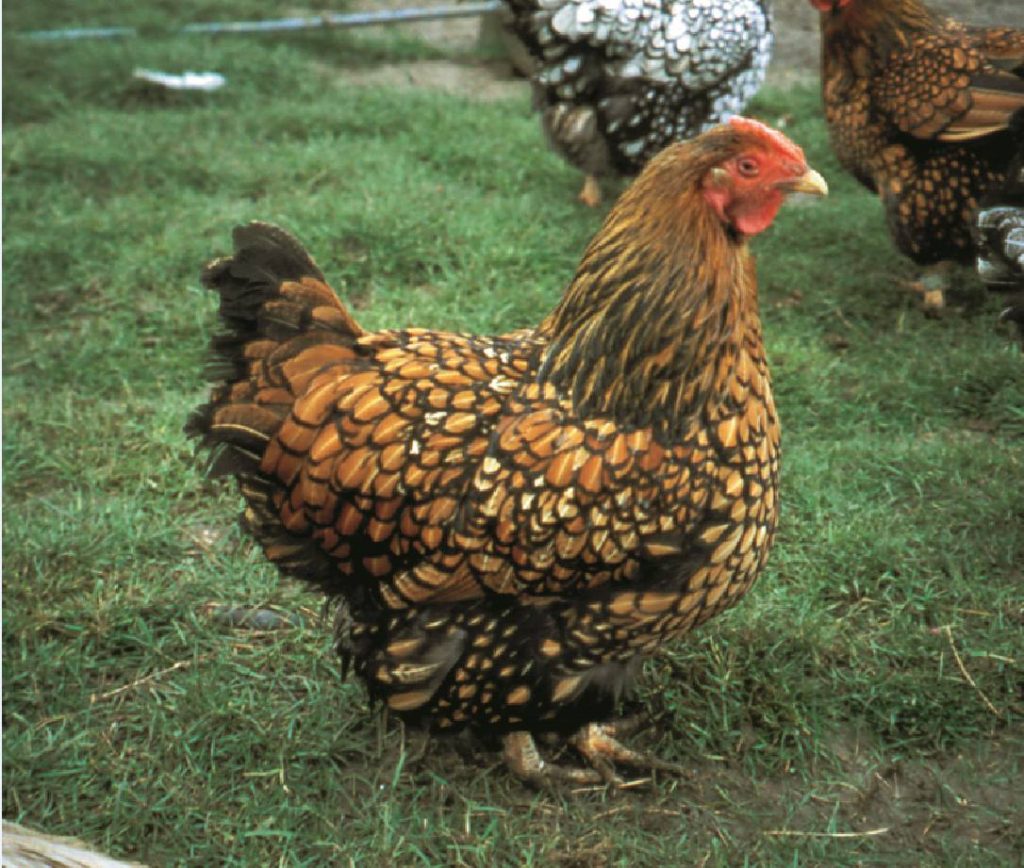 This article about pure breed hens is by John Harrison based on work by Katie Thear.

These are breeds which will breed true, ie, the young will always resemble the parents. Each breed has its own breed club which looks after its interests, and draws up a set of Standards for the breed. The best examples of the breed will be those most closely adhering to the Standards. All the breed clubs are affiliated to the Poultry Club of Great Britain in the UK, or to the American Poultry Association in the USA. There are differences in their respective Standards.

In recent years, the pure breeds have been bred mainly for show, with the emphasis on appearance rather than on production. They will, therefore, not lay as many eggs as the more modern hybrids. This may not be important to those who just want a few birds in the garden, but it is obviously crucial to those who want to sell eggs from their flock. There are a few flocks of utility pure breeds, where the emphasis has been on production, but these days, there are comparatively few breeders with good, pre-war strains. The main utility breeds are Rhode Island Red, Sussex, Leghorn, Wyandotte, Plymouth Rock, Maran and Welsummer.

There is currently great concern about the declining productivity and fertility of the pure breeds of large fowl, for many have become too in-bred, and there has been too much emphasis on appearance at the expense of productivity. Organisations such as the Utility Poultry Breeders’Association are trying to redress matters.

When two different pure breeds are crossed, the progeny are called firstcrosses, eg, when a Rhode Island Red male is mated to a Light Sussex female, the young are first crosses, usually referred to as RIR x LS.

The RIR x LS is also sex-linked, ie, the chicks can be identified as male or female when they hatch. In this cross, the males are always silvery while the females are orange-brown.The cross does not work the other way round.

These have been bred for the ‘fancy’ or ‘showing’ sector. They are pure breeds, of course, but they do not have the productive capacity of the utility breeds. They include Sebrights, Frizzles, Yokohamas, and many others.

(Top of Page) A heavy American breed laying tinted eggs this was once an important utility breed for eggs and table. It is available in many varieties, including Barred, Black, Blue, Buff, Columbian, Partridge, White, Silver-Pencilled, Silver-Laced, Red, Gold-Laced (as above), Blue-Laced, and Buff-Laced. There is also a bantam. 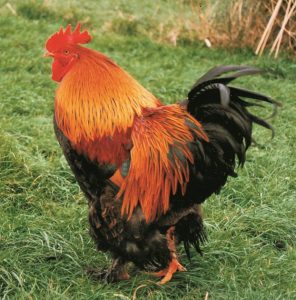 A large, feather-legged Asiatic breed, the Cochin caused a sensation when first introduced in the last century.

It stimulated a great interest in poultry keeping and showing. Eggs are tinted. Varieties are Black, Blue, Cuckoo, Partridge, and White. There is no bantam. 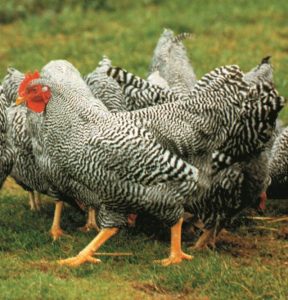 A heavy American breed, the Barred Plymouth Rock is often crossed with the male Rhode Island Red to produce a black sex-link cross for egg and table production.

In addition to the Barred, there are Black, Columbian, Buff, White and bantam. 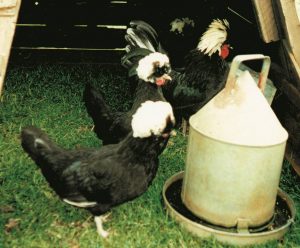 Although the name would suggest they originated in Poland it is most likely that the name is a reference to their top-knot or poll. There’s an article on this: Origins of the Poland or Polish Breed

The White Crested varieties, unlike the others, do not have muffling. There is a bantam. 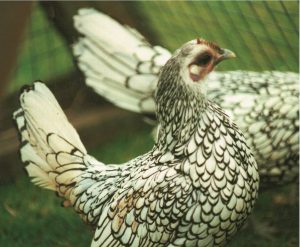 British development, the Sebright is noted for the lovely lacing pattern on its plumage. It lays white-cream eggs, but not in any great numbers, and fertility has undoubtedly declined as a result of breeding for the upright tail, a factor which is often associated with lack of productivity. There are two varieties, the Silver and the Gold.

Like Pekins, Sebrights are naturally occurring bantams and have no large fowl counterparts. 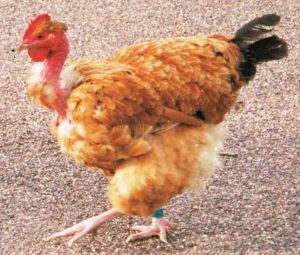 Originating in Romania and introduced to Britain in the 1880s, this extraordinary breed with its neck denuded of feathers, is sometimes crossed with other breeds in the table bird industry because of a gene for reduced abdominal fat. Eggs are tinted.

There is a Black, White, Buff, Red, Blue, and Cuckoo.

By John Harrison based on work by Katie Thear Hybrid Hens These are birds of mixed parents and grandparents which have been developed for production by selecting from the best strains. A strain is a family line which has a particularly...