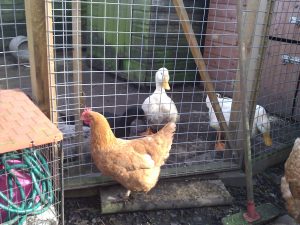 If chickens are in a garden with a substantial fence around it, and there is a family dog in residence, the fox is unlikely to take a chance and pay a visit. He will try somewhere easier.

Having said that, every poultry keeper should be aware that the fox is the prime enemy of chickens, and they need to be protected against him.

There are only two options for the poultry keeper: a fence that is high enough to stop him getting over, or the use of a device such as an electric fence or electronic deterrent.

A smooth wooden fence of the type that is used in many gardens is effective, if it is at least 1.8m (6′) high. Most foxes would baulk at this, although they might try and dig under it, particularly if there is a ‘weak’ area such as a slight gap that could be enlarged at the bottom. It is worth checking the base of wooden fences and reinforcing them if necessary. Extra boarding or wire mesh can be used.

A really determined fox can get over a six foot fence, and if you are unlucky enough to have such a predator in your neighbourhood, then consider putting an extra 30cm (1′) extension on the top of the fence. If this is angled outwards at an angle of 45 degrees, it will stop him, for the combination of height and angle will make it impossible to negotiate.

In an orchard or field the chickens are much more at risk because these often have hedges through which predators can squeeze, or the fencing is lower. Here, unless a high fence of wire mesh poultry netting can be put up, the best option is to use electric poultry netting which can be erected and moved as necessary.

It consists of a series of plastic posts with metal spikes which are hammered in, the netting which is electroplastic twine, straining post guys and pegs, and a rechargeable battery unit. Complete packages are available for the small poultry keeper, and represent the best value, rather than trying to put together a system of disparate items yourself.

Other devices to Protect Chickens

Mention should be made of other devices that are available for deterring the fox. It is possible to use a small electronic system such as the German AXT Electronic device that automatically closes the pop-hole and opens it in the morning. You need to ensure that the chickens do put themselves to bed before the fox starts his nightly prowl. Giving them some food in their house is an incentive for them to do this, and they will then form the habit of roosting before it gets dark. You need to be aware, of course, that in some areas where there are many foxes, they may go on the prowl before dusk arrives.

There are also electronic devices which can be used to form an invisible ‘beam’ around the area. If broken by an intruder (fox or human) an alarm system is sounded or alternatively (and much more desirable if you have close neighbours), a bright light comes on to deter the prowler.

Products such as Renardine are available which are sprayed around the perimeter of the area to be protected, and are said to have a deterring effect. I have never used these and so cannot comment on their effectiveness.

They need to be reapplied periodically, particularly after rain which will wash away the effect. Mention was made earlier of the fact that the presence of a dog has a deterring effect on foxes. Many poultry keepers make a point of walking their dog around the poultry enclosure in the evening so that the scent is transmitted to any foxes.

If you live near a zoo, placing the droppings of a lion or tiger is said to be effective, while llamas and alpacas are reputed to chase them away.

This article is taken from Starting with Chickens by Katie Thear