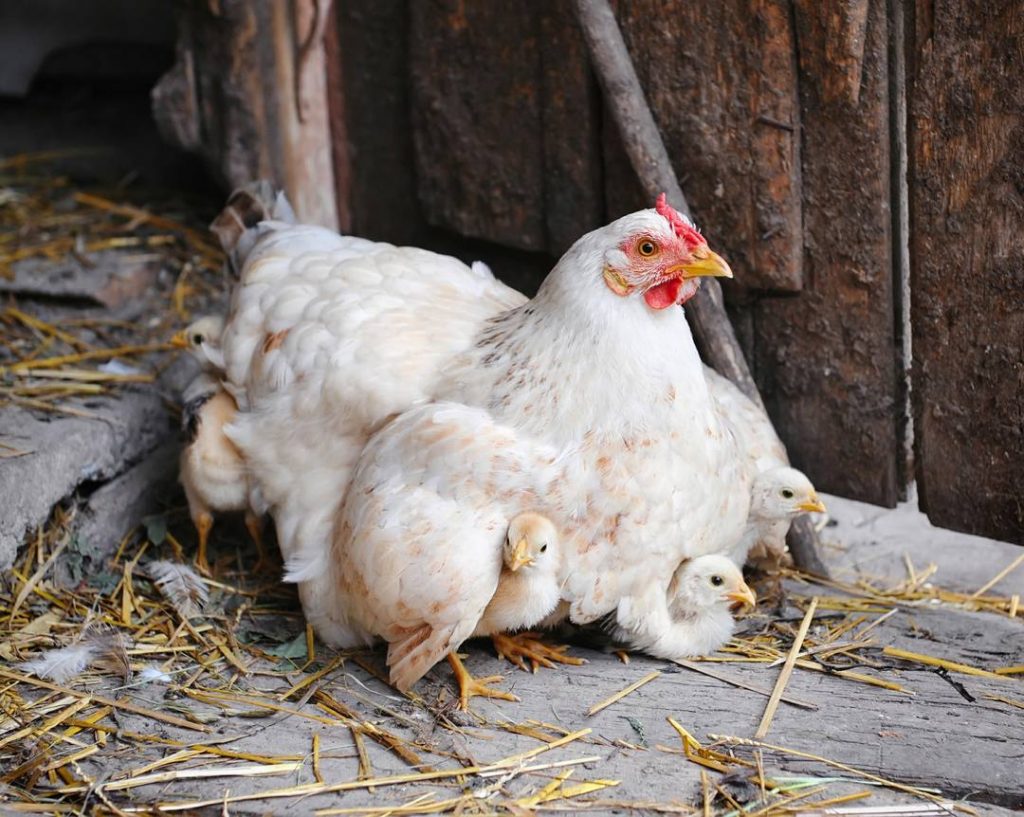 On the day of hatch you should leave mother hen to do her job, she will keep them warm, help them out of the shell and in general know what is best for her babies. You don’t need to worry about them not leaving the nest box for 24-48 hours as during this time they live off their egg sac.

It is a good idea to pop some chick crumb and water close to mum though so she can keep her energy levels up during the hatch. If using an incubator move them to the brooding box and make sure they are warm and on a non-slip surface so as to avoid any issue with spraddle leg.

You can tell if your chicks are warm and content in the brooder as they will spread out around the box and make only occasional cheeps. A cold chick will cheap and huddle by the heat lamp and an over heated chick will go to the farthest point from the heat and is likely to pant.

Under mum though you need not worry, she will keep them warm and, when ready, move them out into the run to feed, drink and explore.

Raising Chicks in a Brooder 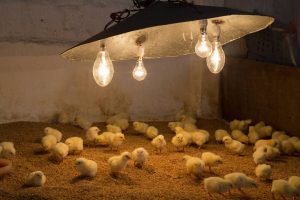 Home Made Chicken Brooder
Using ordinary lights instead of heat lamps but the chicks are happy – neither bunched up nor hiding in the corner.
They’re in the Goldilocks zone – not too hot and not too cold.

If raising your chicks in a brooder you will need them to remain on heat for at least 4 weeks and in cooler months 6 weeks. You should reduce the temperature gradually, either through reducing the thermostat on the heat lamp or moving the heat source gradually away from the brooder.

Once your chicks are off heat it is best to use a separation run before combining them with your flock as there will be no mum to protect them from the rest of the flock.

I would suggest a week of the main flock being able to see the new recruits before moving them in with the original birds. With the broody you will often find at 6-8 weeks she will take the chicks back to the main house with her and will deal with the introduction and protection by herself.

At this stage with both chicks and ducklings you should have a good idea of what sexes they are. The young cockerels by now will have more defined wattles and combs, be larger than their female counterparts and will also demonstrate male behaviours such as standing off against one another or older hens and generally being more dominant.

With ducklings the females will be starting to make a distinctive quack whereas the males will still be cheeping and will possibly be making a quieter more husky quack.

If you are still unsure on sex at this stage and are unable to vent sex you will need to wait for either the crow of the cockerel for the chickens or the development of the curled drake sex feather for the ducks. Muscovy ducks are the exception to this and will instead develop far greater face caruncles (the fleshy wattles) in the drake but they do not have a sex feather.