The house move went well at the end of last month, but unfortunately the same could not be said of our phone line and broadband set up. We are finally online, but it has taken a while to sort to say the least! 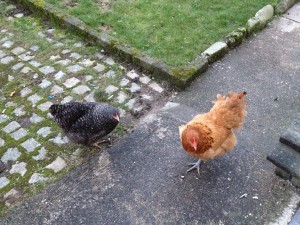 On the day of the move the chickens decided a good old escape would be in order, which led to some hilarity as we chased around the garden as well as establishing the new girls were in fact in lay, but they had been hiding them under a bush. Sadly since the move they have all stopped laying (lots of bush searching and nothing to be seen) so I suspect we will be waiting until February now for fresh eggs from our own girls.

We have been lucky enough to find a neighbour who sells their eggs and a farm gate honesty box for egg sales too on the the way home so we are still happily tucking into eggs from happy hens even if our own girls are waiting out the winter.

It is worth checking with keepers at local allotments or smallholdings if you have them locally for fresh eggs. Often they are cheaper than free range supermarket eggs and of course you know they have been kept in far happier and healthier conditions. 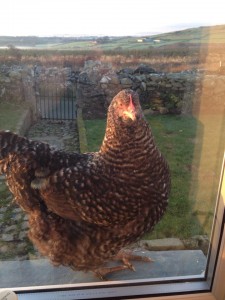 Goldie and Shadow have developed such cheeky personalities since the move. All four girls love the new garden, but Shadow in particular seems to have really settled and now “knocks” at the catflap or window if she wants treats! The girls have also worked out that pestering Gabriel works well for treats. He now loves going out with titbits for the girls and having them flock around him. I don’t think it will be long before both Goldie and Shadow will feed from his hand.