I’ve been having a bit of a problem with the three ex-barn girls the past few weeks. Their little house has a secure under-run that in the morning they come down into until letting out time. They have food and water in their, shade and a spot to dust bathe and they are let out normally at 9am on weekdays and 10am weekends with the ducks.

Over the past few weeks though one of them has started kicking up such an almighty fuss that she is in the run and not in the garden that I’m sure it must be disturbing the neighbours. The first few times she did it didn’t matter as was about 7.30-8am so I just let them out, checked she was okay and didn’t think much of it. Problem now is all three have decided to do it but at 5.30-6am!

I’d love to just leave them to it and ignore the noise as by letting them out I am reinforcing that by screeching they get their own way, but I don’t think the neighbours would much like a week of constant screeching while it took effect!

Sadly I think the only thing I can do to maintain my sanity (5.30am is still very much night time thank you very much!) is to lock access to the under-run keeping them in their house until let out time.

Today though the three of them are trying to look as though butter wouldn’t melt. I’m sure they know that something mean is going to happen to them so they are following me around the garden “helping” me with the deep beds and enjoying yet more sunshine while we have it  🙂 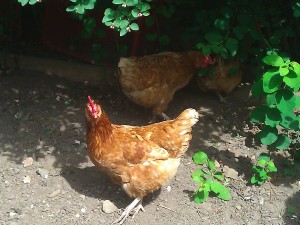