Last year I had a terrible accident when one of my drakes accidentally drowned one of the young females, Doo, during mating. It is an unfortunately common problem especially in the Spring and with younger birds.

It would seem that little Doobie (Doo’s sister) was nearly to go the same way after finding both Bumble & Bee pinning her in the water, head under and gasping.

Doobie was pulled quickly and had to have a good recover as she was so water logged and exhausted and couldn’t even walk when pulled from the pond. A little bit of tuna cat food laced with some Metacam and an hour on the patio in the sunshine warmed her up and she was able to go back in to the run with the others. The funny thing with the tuna cat food though was watching Rufus Cat trying to hook the food from the bowl in the cage. Sadly by the time I got the camera it had all gone!

I must admit I’m now worried about her as she is such a little thing and insists on head bobbing flirting with the boys all day long!

Thankfully though she now seems fully recovered from her ordeal and other than one day without laying has restarted gifting me her lovely blue eggs.

I took a photo of her all crated up and feeling sorry for herself and thought I’d share with you. Doobie is a very pretty little thing even when bedraggled and caged  🙂 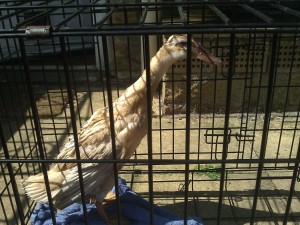