Little Chicks Growing Fast and Feathering Up for Flight

The chicks are quickly gaining their feathers now. It’s interesting to watch as they are all the same age yet some are far faster feathering than the others. The three Welsummers are ahead of the rest, but even the slower chicks are getting some beautiful plumage coming in. With feathers though comes flight. As I sat in the living room yesterday afternoon I could hear such a kerfuffle above me I thought the cat had got into the room with them. I ran upstairs and thankfully found no cat, but instead four of the chicks happily zipping around the playroom. Of course this also meant pooping around the playroom, gosh they do that a lot! 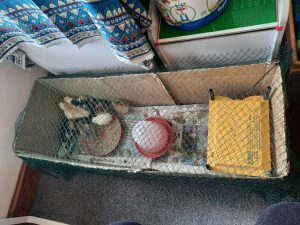 Chicks in a Brooder Box with Netting

After collecting up the escapees – then collecting them again as they jumped straight back out – I netted the box to stop any further adventures. Today we are also making them a far larger brooder box so they can stretch their wings and zip around more. They have fast outgrown the first box we set up for them and really need the extra space.

The chicks will be staying in the house until all of them are fully feathered. Probably another 3 weeks provided the night temperatures also aren’t dropping too low at that point. All of them will be going into the new run and coop in the garden at that point. Although our coop is best suited to only 6 large breed birds, these will be far from fully grown for a few months yet and so plenty of space.

As the boys grow they will also be destined for the table. We do plan to keep one cockerel, so whoever is the friendliest will get to stay. It is important to decide what you will do with surplus males before hatching or taking on day old un-sexed chicks. The girls, depending on numbers, will be staying here and on the small holding. I’m assuming we’ll have a 50/50 split on male and female at the moment, which should hopefully rejuvenate our older flock on the smallholding and increase egg production somewhat when they eventually start laying. We’re lucky if we get 2 eggs a day from the older girls, who are now more happy retirees than anything. 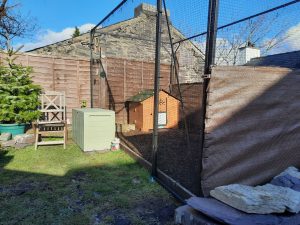 I mentioned in my last blog that I’d be doing a full review for the Harrod Horticultural Steel Poultry Cage. This is now live on the Poultry Housing Pages and I must say we are very impressed with it. The fact we’ve been able to use such an uneven and previously unusable space for the run has really benefitted our garden space.

The run is proving secure even in high winds and so far we’ve had no cats manage to fall in – something we worried about with the roof meshing and daft young cats! I do think we’ll add some roof covering come autumn, but other than that it is perfect for our back garden flock of hens. It will keep them safe when we are out and also keep our veggies safe from them when we can’t be out in the garden with them.

I realised I haven’t shared about two new household members than have joined us this past year. Sadly our beautiful old girl cat Arwen passed away last Winter. It was expected due to her age, but still left a huge gap. Not long before she left us we’d adopted Luna as a teeny little kitten. Now she is the biggest ball of beautiful fluff, but she was also missing a younger cat companion, as well as missing the cuddles she had from Arwen. Our two remaining boys – Ninja and Spike – are both preferring sleeping in sunny spots than playfights and mouse hunting now. 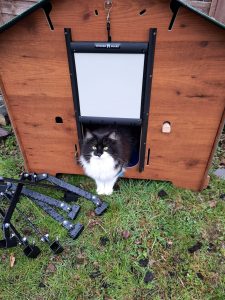 Luna in the Chicken Coop 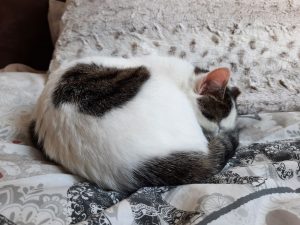 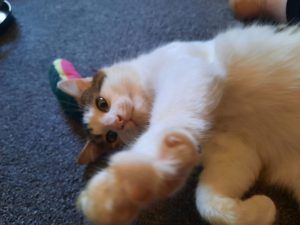 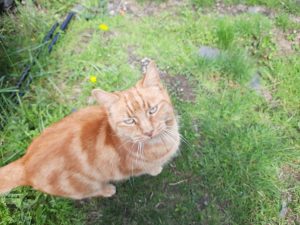 So, in January we adopted two beautiful 2 year old cats from Freshfields Rescue – Hera and Zeus. We did everything we could to get them both to integrate into the household, but Zeus couldn’t overcome a natural aggression with other cats. We used feliway, zylkene, a mesh door to keep them apart but in sight, a cat leash, and hours of trying introductions over a period of 12 weeks. Sadly though it just wasn’t working, anytime he was off leash and could he would attack the other cats. Ours cats were stressed, he was stressed, and we had to admit defeat. After talking with Freshfields they agreed it was best he found a home with no other cats or animals, but that Hera remain with us since she had settled so well. Since he was very loving with humans, not an ounce of aggression towards us, he thankfully found a new home within 4 days thanks to the wonderful ladies at Freshfields.

All our cats know their place when it comes to chickens – bottom of the pecking order! I was a little worried the first time Hera ventured outside how she would react with next door’s older hens. Thankfully they soon gave her a peck for her interest and like all our other cats she learnt fast to keep your distance from the bird giants!