John still has the chooks up at the smallholding. The remaining Charlie lives with her “Angels” now (sorry for the bad TV pun), a bunch of ex-barn hens who are more in peaceful retirement than on egg making duties. Although we live less than a mile away we decided it would be nice to have a few chickens pottering around our own garden again too. Gary has been hard at work this past month getting everything set up. 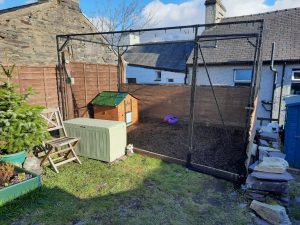 First off we needed an enclosed chicken run. Although the girls will be allowed to free range when we are home, they need somewhere secure for when we are out. This is in order to keep them off the veg beds and out of Mr Fox’s stomach. We debated going for another Eglu, like we have on the smallholding, with their attached movable run. However, our garden is very uneven and we’d have struggled to keep the run flat to the ground and we’d have been quite restricted in where it could move to making a fixed run a better idea.

After speaking with Harrod Horticulture we decided by far the best option for our very uneven and more-slate-than-soil garden would be one of their Poultry Cages. We opted for their Heavy Duty Steel Chicken Cage. We have used this with their Heavy Duty Foot Plates as this meant we could adjust the pole height at each corner to even out the run. It is built to withstand extreme weather conditions, which is a must out here since 60mph gusts that tunnel through the hills are a regular occurrence. To  add yet more extra strength we also used the optional corner braces.

To give some additional wind and rain protection for the chickens we used some heavy weight wind netting along the two most exposed sides of the Poultry Cage. I may also add a cover to the roof, which is already bird netted, should rain become too much of a problem in there for the flock. I’d found that a lot of runs were a standard 3mx3m or 2mx2m etc, but one of the big bonuses was that Harrod Horticulture can make the cage to fit the area you want to use – this way we were able to use the whole 3.5mx2.5m space we wanted for the run. I’ll be putting a full review up on the Poultry Housing Pages later this week, but suffice to say we are very impressed with this run so far.

During May 2021 Only get an extra 10% off from Harrod Horticultural using our exclusive code JHTEN at the checkout!

Once the run had been decided upon we needed to choose a new coop too. I was pretty set on getting an Eglu and siting it within the Poultry Cage, however I had also recently been contacted by a supplier called Chartley Chucks who had a different type of coop on the market – made from High Pressure Laminate. They sent us over one of their Easicoop ECOs and it is actually perfect for this back garden poultry setting. I’ve carried our a full review of the Easicoop ECO Chicken Coop from Chartley Chucks and we’re looking forward to onward testing it for longevity too. 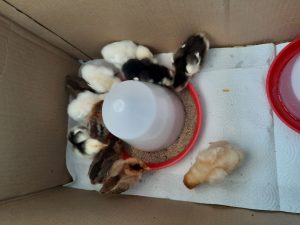 Whilst all this was ongoing I got some eggs set into our Brinsea incubator. At the time we started getting everything set up the Avian Flu Restrictions were still in place, as such I figured hatching out own would be the easiest option (since live transport was restricted).

Hatching however, has sadly not gone as planned. Hatch one the thermostat was moved (little 7 year old fingers we suspect) and the temperature fluctuations meant all eggs failed. Not to be deterred we got another six eggs in ASAP and at day 18 four of these were thriving and locked down for hatching. Unfortunately only one little Brahma hatched from the 4 viable eggs. Humidity and temperature were both spot-on so we really were at a loss as to why the other 3 failed at such a late stage.

With only one little chick we moved into panic mode a little, but thankfully we were able to source some  two-three day old large fowl – Welsummers, Orpingtons, and Light Sussex – to join out little Brahma. They are all now 6 days old and thriving. The Brahma chick is a day or so behind the others so looks tiny despite the fact one day is likely to be the biggest of the flock. Gabe is thrilled and is really enjoying looking after the chicks. Two of the Welsummers are female – an easily sexed breed from a day old – and he has called them Daisy and Cheepy; it will be another 5 or 6 weeks before we can be sure on the sexes for the rest of the chicks.

Leave a Comment Here on New Chicken Enclosure and Incubation