I’ve not posted here for some time. Basically there was nothing to report, everything being routine and quiet. One of the two Charlies has decided it’s time to moult – which is a bit odd and Chocky has decided she’s retired. She still lays the odd egg, just to keep her hand in, so to speak, but that’s it. 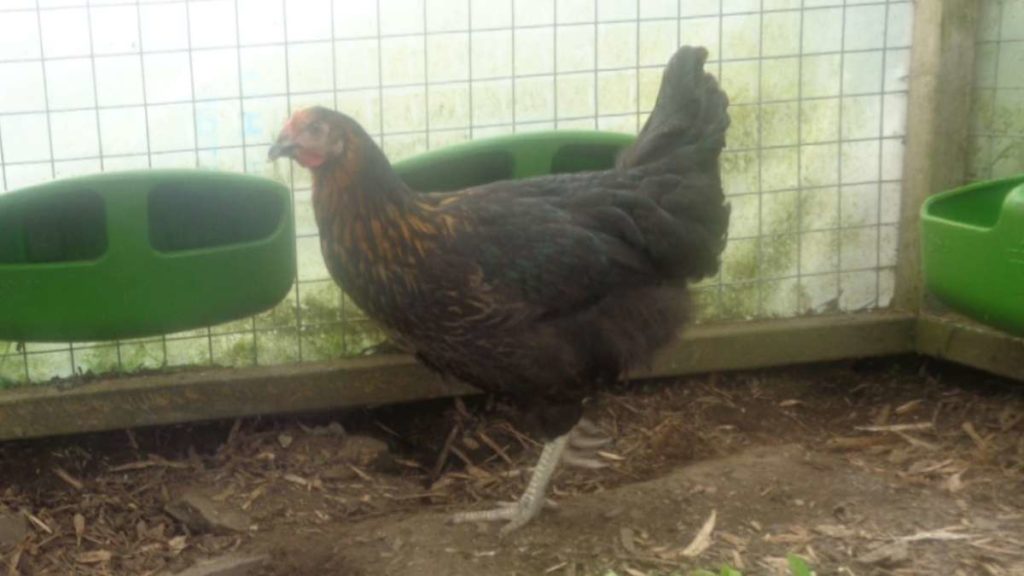 Why I’m Increasing the Flock

Most days now it’s just an egg with the occasional two, which is not enough. Time to increase the flock. Now I’ve wanted some Black Rocks for a while. Black Rocks are a hybrid breed. They’re not top of the laying charts – averaging around 280 eggs a year – but they’re a tough, long-lived breed. Not as docile as the Charlies but quite friendly if you spend time with them.

One of our breeders, Clegir Farm, sells them. They’re in Anglesey which isn’t far from us. We made it a bit of a family outing, Cara and the grandson came along with us. Little man was quite excited, although whether by the outing to see some chickens or managing to blackmail a bag of chips on the way home if he was good I’m not certain. 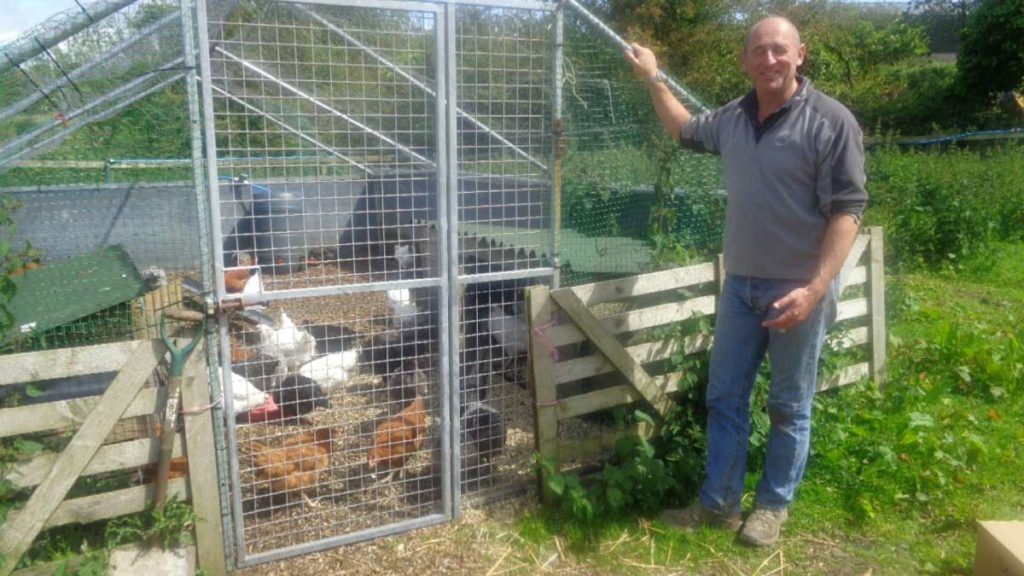 Andy of Clegir Farm with their pullets for sale. 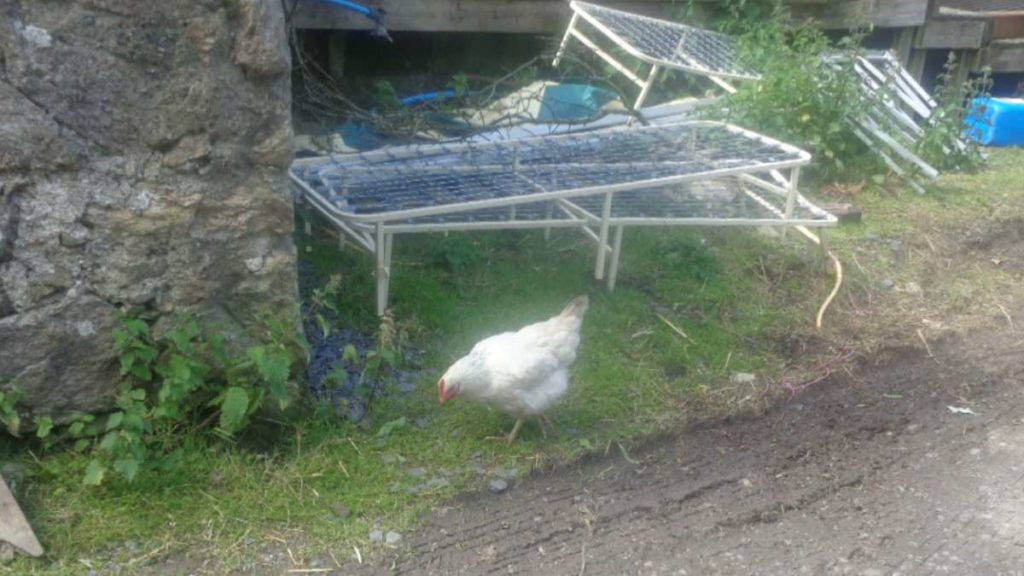 One of Clegir Farm’s own hens ranging around the farmyard

We crossed the bridge and headed into darkest Anglesey and soon arrived at the farm where we were met by Andy who showed us to the birds. Now when buying chickens, use your head and trust your gut. If you don’t like the condition of the birds or the seller is evasive, or you just get a bad feeling – claim you’ve forgotten your wallet and go.

With Clegir Farm we didn’t have any reservations or concerns. The birds were obviously happy and well looked after. We picked out three and popped them into cardboard box for the journey back. There was a bit of soft grumbling from the box, probably wondering why night time had arrived early, but no problems. Much of the journey was spent discussing names, I think we’ve settled on the Rockettes.

Back at the ranch, I’d been preparing. I’d scraped out the woodchips from the secure run and limed the ground before adding fresh chips. The coop had a very thorough clean out which is pretty easy with an Omlet Cube. Just set up the jet wash and get spraying. The feeders and drinkers got a good clean as well, so the new girls are coming in to the best possible environment.

When we arrived home I let the flock into the large run where the old guard seemed to totally ignore the new girls who explored a bit nervously. Since all was peaceful, we left them to it just keeping an ear open for the sounds of war breaking out and checking everyone was OK every so often.

One of Our Hens is Missing!

Come evening it was time to get them all into the secure run, safe from Mr Fox but one of the new girls was missing. Some panic ensued until Val spotted her in the orchard. Then a right game. We’re not as fast as she is although I thought I’d got her trapped until she flew over the wall into another field.

I headed around to the gate and then into the field where she was happily scratching now. This attracted the sheep who felt I should be bearing gifts and bleated loudly at me. By now it was getting on for 10 o’clock and we weren’t winning. Time to deploy the secret weapon, so I rang our neighbours who came straight down to our aid.

More distraction, chasing and rugby tackles followed until finally she was captured. I think she was getting tired and sleepy by now. In the run, the Charlies and Chocky had retired for the night but the Rockettes were wandering around looking confused. I picked one up and popped her into the coop. 2 seconds later, Hell broke loose. Much loud squawking and out flew the Rockette.

The Rockettes then decided they weren’t being placed in the coop and ran round like greyhounds whenever I tried to pick one up. Gave in and left them to it until it was fully dark when I found them huddled in the corner. The auto-door was closed so the simple route was to put them in the coop via the nestbox.

Next morning they were still in the nestbox. I took them out, giving each of them a minute of gentle stroking – they’re already calmer with me. They headed for the food and then Boss Charlie went for them. Well, after 15 minutes of mayhem, I thought enough was enough. Boss Charlie was put in the big run leaving the Rockettes with Chocky and the other Charlie. 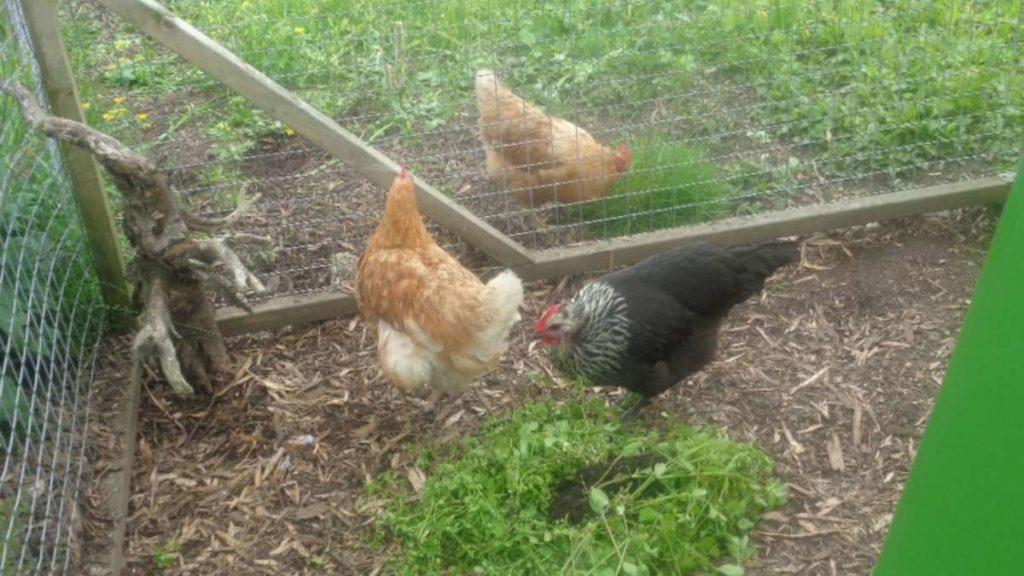 There’s a bit of snippiness, establishing the pecking order, but nothing too violent. Come evening I let Boss Charlie back in but cunningly distracted her with a bowl of mixed corn and a few strawberries. Far more peaceful. Come dusk the Rockettes were again huddled in a corner but this time they let me pick them up and pop them into the nest box. 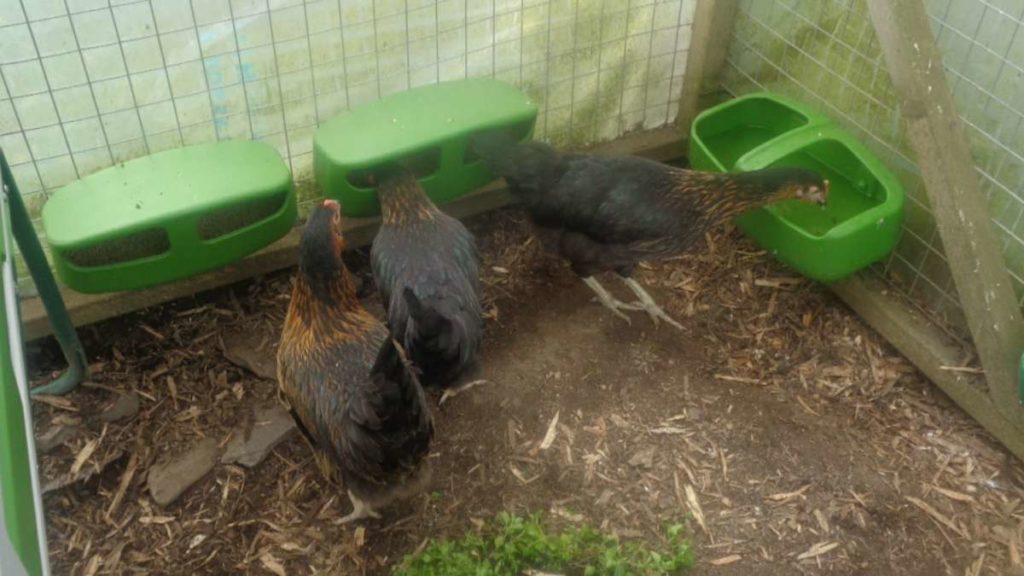 The Black Rocks found the food!

This morning two Rockettes were on top of the coop and the third at the food. Chocky is still being a bit “I’m the boss of you!” but nothing to worry about. The Charlies were in the nestbox, whether laying or sulking I’m not sure.

Hopefully things will settle down soon and the Rockettes will be going up to bed without a battle. 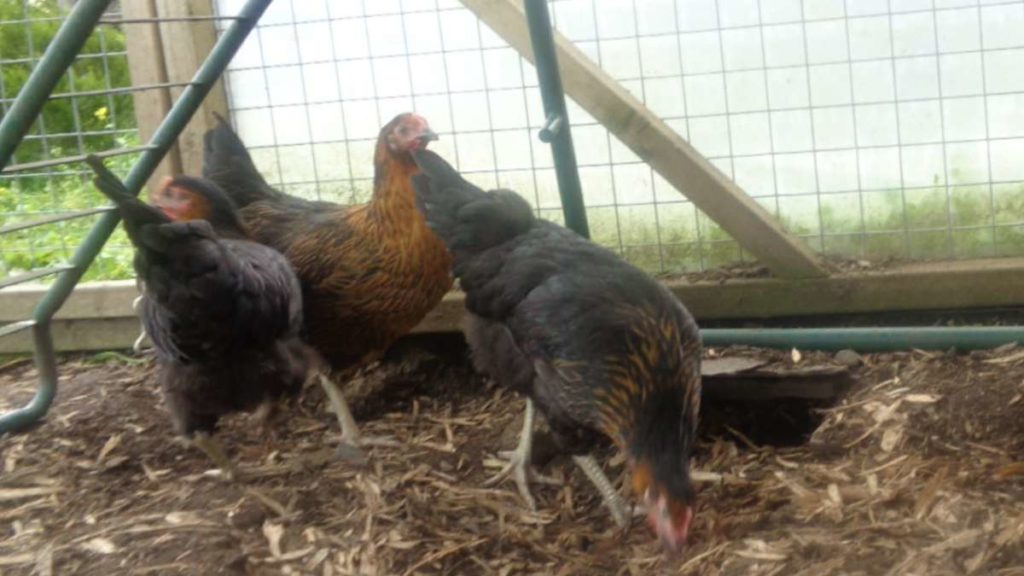 The Black Rocks under the hen house.