One of the three Charlie Browns has suffered a vent prolapse. This is very serious and we may well lose her. Actually, I think her chances are very slim. Fortunately she doesn’t appear to be in any pain, so we’ll do what we can for her. 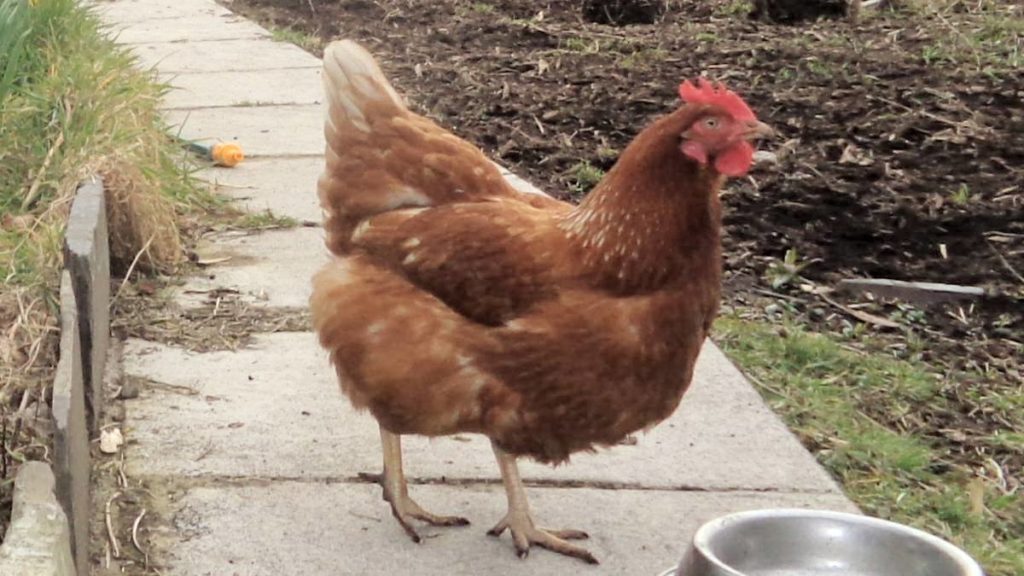 A vent prolapse looks pretty grim, it’s like her insides are coming out of her bum. Initially I noticed she’d got a dirty back end and her eggs were getting mucky. I thought she might have eaten something that disagreed with her although the other hens’ droppings were normal.

The muck was starting to build up so decided to wash off her rear end. We went up with a bowl of warm water with a drop of anti-bacterial hand wash in and dunked her rear in it. She was remarkably calm, but looking a little worried. I just kept talking to her whilst we dunked and pulled off lumps of poo. We were wearing latex gloves so not as grim as it sounds.

Once the rear end was cleaned up it became clear what was going on. Things looked pretty red and raw. I took a couple of photos to accompany an article specifically on Vent Prolapse in Hens but have not put them on this post as they’re a bit grim.

We gently popped things back, using haemorrhoid cream (Anusol) as a lubricant. It contains ingredients that soothe and protect raw areas, help reduce swelling, prevent bacterial growth and can promote healing. I’ve probably just admitted to breaking some law about using unauthorised medicine on livestock but I believe it will help.

Next we sprayed her back end with antiseptic spray (purple spray) which will also help her and stop the other hens from pecking at her back end. The moment we put her down she rushed over to the treats bowl where I’d put some mixed corn.

The plan is to keep repeating the treatment for a week and see how it goes. If she starts looking distressed then we’ll do the kind thing but so long as she isn’t suffering we’ll keep trying.

Cause of Vent Prolapse

There are a number of reasons for a vent prolapse but with Charlie I know it’s because she lays very large eggs. It would help if we could give her a break from laying but the days are getting longer which means she’s laying more.

We could reduce her pellets, fill her up on greens but she’s a hybrid layer. Her genes have been selected for laying and a restricted diet means she’ll just carry on laying but lose weight and condition to do it. Hybrid layers will even take calcium from their own bones to produce eggs.

I believe the farming industry has over-bred our chickens to produce too many eggs. It may make economic sense and convert food inputs more efficiently to eggs but there is a cost to the hens. Any hen can suffer a prolapse but a breed that lays less eggs is less likely to prolapse and more able to recover, with help. Poor Charlie’s genes are working against her.

Leave a Comment Here on Charlie Hen has Prolapsed