Cleaning the coop is a weekly 10 minute job but the run takes a few hours every few months. The thin eggs problem sorted and the hens are now getting their treats again along with their feed. 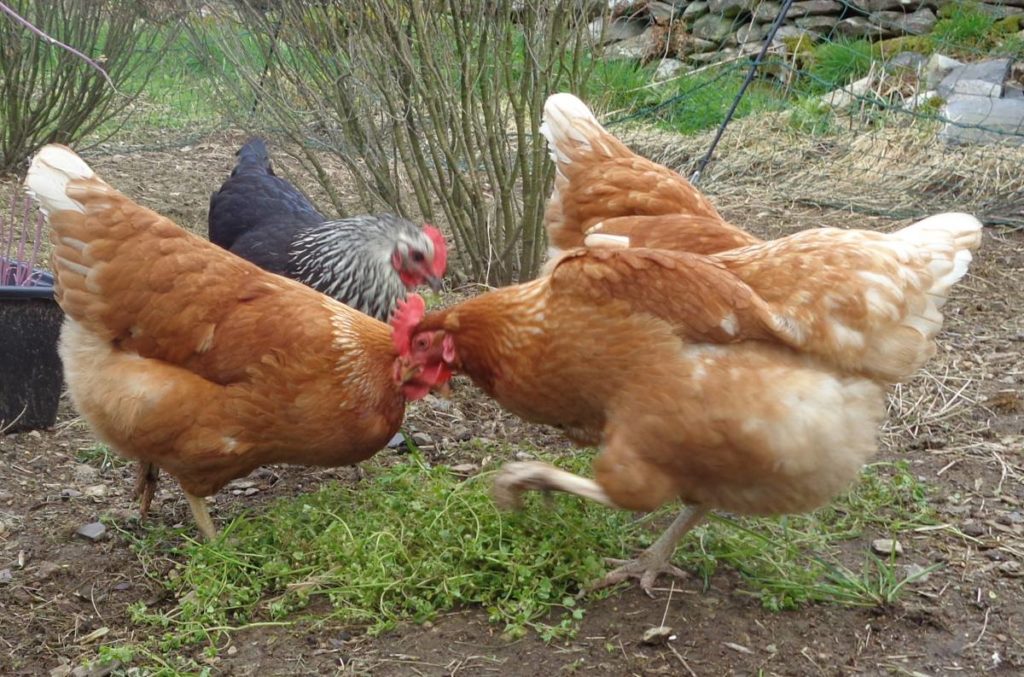 I clean out the coop weekly, which doesn’t take long with the Eglu. Empty the droppings tray into the compost bin and hose down the tray and roosting bars. Poo-pick the nest box and that’s about it. I’ve got it down to about 10 minutes maximum now, so not a big chore. I have noticed that as the days get longer and they spend less time in the coop, the amount of muck in there has gone down considerably.

On the other hand, because they’re spending longer in the secure run there are far more droppings in there. They don’t get let out of the secure area until around 8 am and they gravitate back to the coop area an hour or so before sunset.

Dawn, dusk and night are the prime times for fox attacks on poultry so I balance risk and just let them out into the big run when it’s most unlikely the fox is around.

I basically feed the hens in the secure run. The Avian Flu restrictions are still in force and the secure run is effectively covered using polytunnel plastic (available from First Tunnels), minimising the risk of contamination from wild birds.

It’s annoying that the government bring out the flu restrictions and set up web pages to keep us informed but then don’t bother updating them. I wonder if they’ll leave the ‘temporary’ avian flu restrictions in place permanently.

I cover the ground in the secure run with bark peelings which I top up as required. Usually I just trundle a wheelbarrow load up to the run and leave it in a pile. The girls then have great fun kicking it all around. They do a better job of spreading it evenly than I can do with a rake!

There comes a point though when I can’t add more bark peelings so it’s time to rake it all out and transfer to the compost heap. That’s a job that does take a couple of hours but I don’t mind – it makes great compost especially when mixed with green materials. A gardener can’t have too much compost.

I despair when I hear of back garden chicken keepers putting bags of used litter and droppings into the bin. It’s a brilliant high-nitrogen natural fertiliser. If you’ve room for chickens then you’ve room for ‘Dalek’ compost bin or, at worst, bag up the droppings and give them to a gardener. Old time farmers reckoned half the return from their poultry was the fertiliser their hens produced.

Chocky (the Norfolk Grey) is again laying flawless eggs with a thicker shell. She was laying eggs with very thin shells. The Shell Aid seems to have done its work along with cutting out treats for a week. So they just ate layer’s pellets which are balanced and contain calcium.

I suspect Chocky may be older than we were led to believe at the auction, as her egg laying is quite low even for a pure breed. I don’t really mind, she’s a pet even if she thinks I’m likely to eat her at the drop of a hat. I won’t – she’ll be a bit tough 🙂

Back on the Treats

They’re back on the fun stuff now – hanging up a bolted cabbage gives them hours of fun and, with care, you can take the head out of a cauliflower for your table leaving them another hanging toy with the stalk and leaves.

Weeding is another good source of treats – chickweed goes down well as do dandelions. I drop the weeds in the run and just dispose of any they don’t in the compost heap.

They also get the odd cupful of mixed corn, especially if the weather is cold or pouring with rain – keeping them in the secure run. They’ll spend a happy hour scratching around to unearth the grain.

Boredom and high-density stocking cause problems with the hens pecking each other. If they draw blood there is a good chance they’ll all start attacking the injured bird and it can result in death.