I’ve been making the girls work for a living more, now the weather’s improved. It may surprise you to learn that you can train chickens, to a degree at least. They associate humans carrying a shiny bowl with treats so that’s a good starting point.

When I open path side door to the secure run they happily follow the treat bowl down the path and into the walled veg garden. Once there they forget the bowl and rush off to play. The first few times they wandered off easily if I moved the bowl out of their eyeline but now they act as if they know where they’re going and it’s become quite easy.

Pretty soon now I’ll be planting out in the walled veg garden so the last thing I want is the ravenous raptors tucking in to my beans and caulis. I don’t think they can be trained not to eat the veggies! That brings me around to the main run around the secure run. 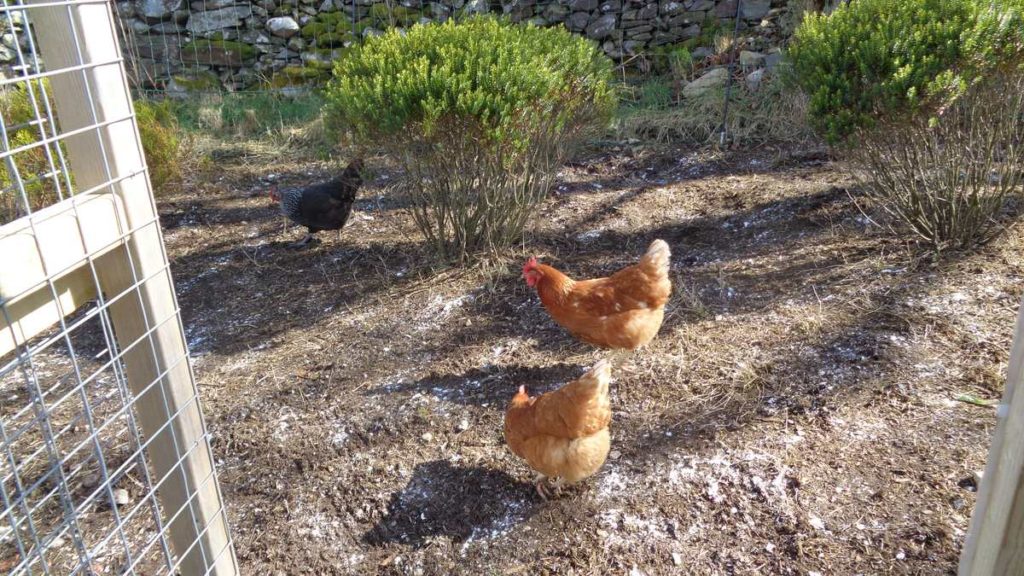 The chickens out on the main run that they’ve stripped bare. The white patches are lime, not snow for a change.

I was surprised how badly the hens had devastated their main run over the winter. Initially we had 5 hens (before Bob passed away) running on the 45 sq. metres which gave them 9 sq metres per bird. A little less than the free range regulation of 10 sq metres per chicken – although including the 7 sq metre secure run they actually had more than that amount. What I should have done is to split the run so I could allow half to recover whilst they were on the other half.

So, since I can now re-seed as spring is supposedly here, I raked off the thatch of dead grass etc. I then gave it about 150 grams per sq metre of dolomite lime. This will neutralise the acidity caused by their droppings and help with any worms or other parasites in the soil.

We had a good amount of rain overnight which washed most of the lime into the soil. The next day I raked over any patches that were left before letting the girls in for a scratch around. I’ll halve it off next and re-seed the no-chook zone until the pasture mix is growing. 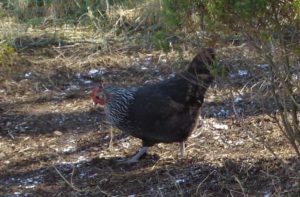 Chocky’s eggs have quite thin shells and occasionally little holes at one end which is not good at all. With them being quite fragile there’s always the chance of an egg breaking in her on lay. That’s a problem that is often fatal.

The Charlies’ eggs are fine so not a general problem. Thin shells are caused by a lack of calcium carbonate which the hen needs to form the shell. There’s 4% calcium in the layers pellets which should be enough and they’ve free access to plenty of oyster shell (a high calcium material) available as well.

A lack of vitamins is a possible cause. Laying hens need vitamins A and D to take up and utilise calcium. These are contained in the layers pellets as well. 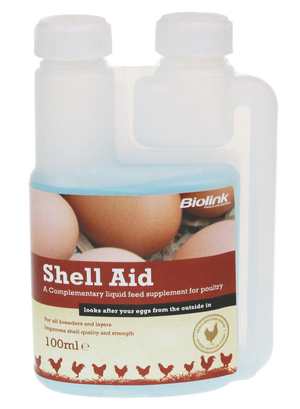 The old remedies for thin eggs were to add extra calcium in the form of limestone flour to the mash and cod liver oil – an excellent source of both vitamins A and D. What I’ve decided to do is to add Shell Aid to the water initially, which should sort out the problem.

Shell aid contains a wider range of minerals and vitamins than cod liver oil It is specifically formulated to help with thin eggs. It seems expensive at first but you only use 5ml per litre of water. They recommend an initial period of 7 days but you can put in the water all the time.

The big benefit of a supplement in the water is that I know she will be drinking it whereas a food additive might be missed. If I made them a mash with cod liver oil she might not eat it or not get her beak in between the boisterous Charlies.