The weather has been particularly erratic, the snow had gone and things seemed set to warm up when another load of snow dropped on us. Thursday greeted us with a good 6 ins. over the world. 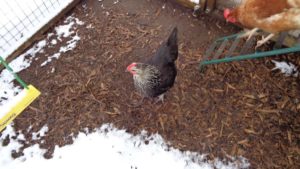 Is it safe down there? Chocky checking it out before the Charlies come down.

As I made my way up to the coop to let them out, I took a detour to the shed and filled a mug with mixed corn to give them an energy full breakfast. They need all they can get to keep them warm in this cold weather.

I filled the silver dish, a large metal dog bowl that I give them treats in, and put it under the coop before opening the pop-hole to let them out. It was so funny; first of all one of the Charlies – our grandson’s name for the nova browns – popped her head out of the door, saw there was snow around and went back in.

There were various clucks and then Chocky, the Norfolk Grey, stuck her head out. After a moment she decided to brave it and fluttered to the ground. She stood there for half a minute, looking around before spotting the treat bowl under the coop and headed straight for it.

Up above the Charlies were watching, just as if they were checking she was OK before cautiously coming out into the white world. Then there was the usual mad dash and scrum around the corn. 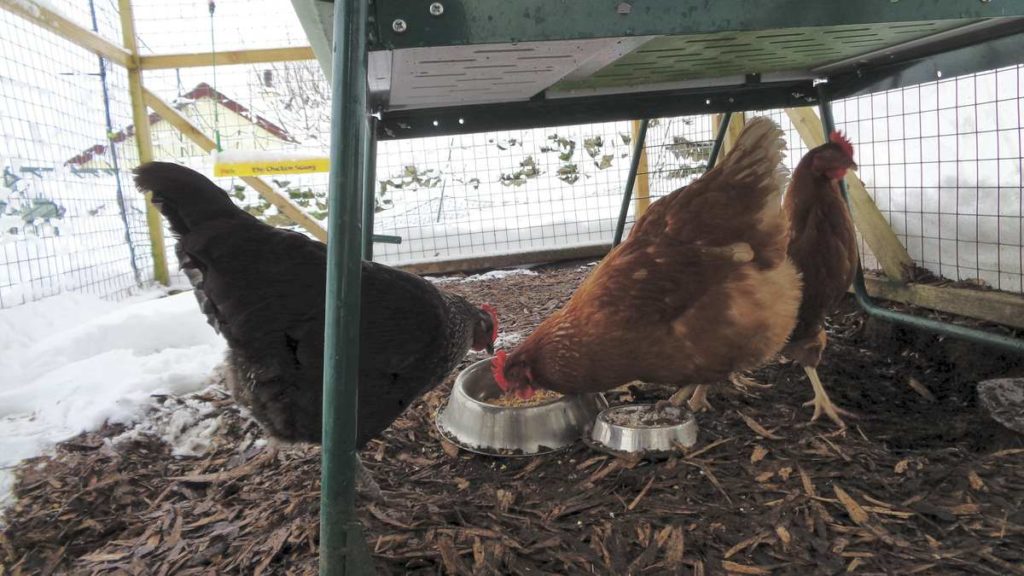 Corn for Breakfast under the coop.

The days are getting longer now, pretty soon we’ll be at the spring equinox, and the hens will be in full lay. The Charlies may well give over 300 eggs a year being hybrids and Chocky is likely to produce over 200 eggs. The average was just under 3 eggs a day but we’re getting 4 quite often now.

I’d estimate we’re getting near two dozen eggs a week now. I suppose I should keep a proper record but they’re more pets then livestock so egg production is secondary in the order of things.

Since they’re supplying two families, that’s about adequate but I’m mulling over getting another couple of birds once the weather warms. Happily there’s been no developments on the avian flu front so hopefully those restrictions will be lifted soon.

The cover over the secure run took some damage in storm Emma and is letting more rain in although the feeding area is covered and sheltered with windbreaks. It will be easier to replace on a calm, warm day when I can get it tighter. It was a bit loose and flapped in the wind which is what allowed the storm to rip it.

Leave a Comment Here on More Snow, Egg Production Up