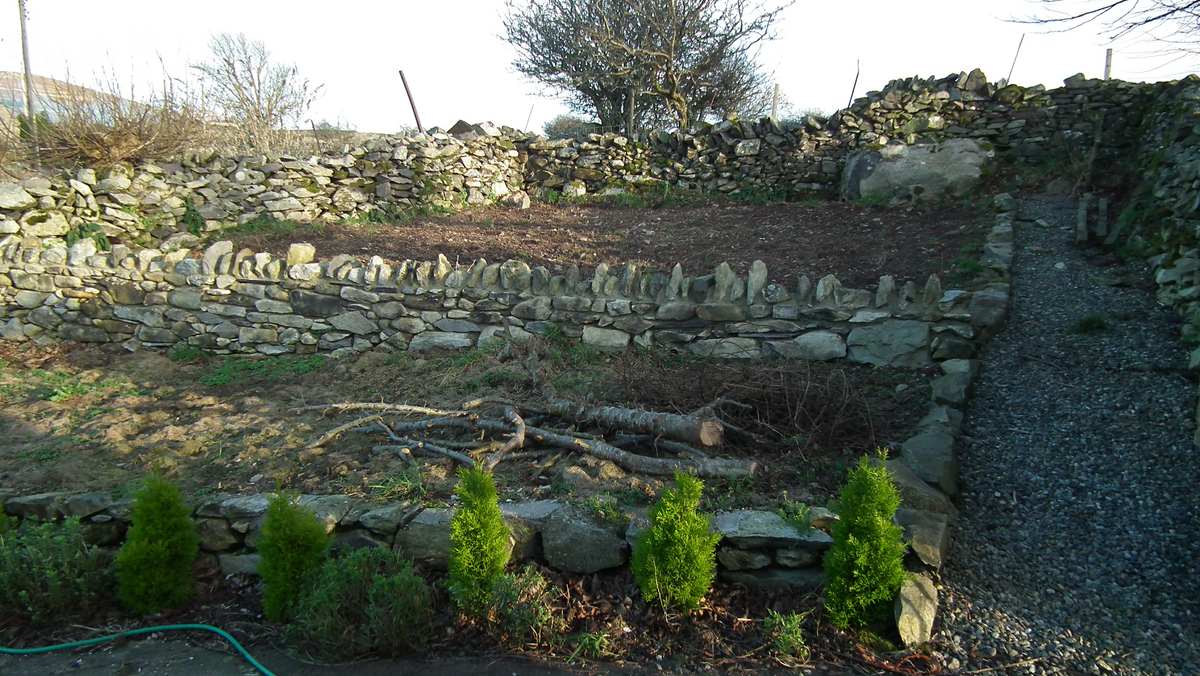 As you may recall, our hens were all taken by the fox last year which upset Gabriel – and us. Since then we’ve been without birds but that’s coming to an end now.

We’re determined that this time they’ll be totally safe – at least as safe as we can reasonably make them even if they have to sacrifice some freedom to roam about. We’re just looking at 6 layers initially which, if kept to legal free range standards, would require 60 square metres of space to roam.

Now the fact is that commercial free ranging hens are mostly kept in large sheds from where they have access to those 10M2 per bird. Some never actually leave the shed if food and drink is available inside and those that do venture out mostly don’t venture far from home.

Most authorities feel that birds kept outside but fenced in actually require 10 square feet (0.9 square metres) per bird –  Our new small flock of 6 will have those slightly more than those 10 square feet each in their enclosure but the enclosure will sit on and move around, 60 square metres of pasture. Hopefully the best of both worlds.

I did consider fencing in the entire area but if it is to have a secure roof against foxes it will become a construction job beyond my limited skills. Just putting up a fence would not be secure unless it was really high because of the stone walls which provide a convenient step ladder for foxes outside or, if fenced outside, hens from the inside.

Besides with this latest flu problem and the probability we’ll see it come again, providing a roofed pen is a must. Although I see it being netted with good quality chicken wire, it should be straightforward to attach a tarpaulin cover for bio-protection.

Preparing the soil for the pasture.

The area we’re using was originally quite steeply sloped but we’ve built two stone retaining walls and terraced it. The top terrace is 60M2 in area and still slopes but not drastically.

The soil itself isn’t too bad although lacking in humus and nutrients for growing vegetables it won’t take too much effort to bring it up to a good standard for pasture. Like most of the soil here, it’s got a lot of rocks in it.

The ground has been rotavated a few times which made it easier to rake more level and it’s thrown up the rocks which are being picked out.

Adjusting the pH and Fertilising

The birds will provide quite a bit of high-nitrogen fertiliser from their droppings but I need the pasture to establish quite quickly so it will need some nitrogen initially. I also want to bring the pH up to around 6.0 which is the ideal so I’ll initially add garden lime at 500 grams per square metre and rake it in.

One of the benefits of keeping our own layers is that we can supplement their feed with quality pasture containing a mix of grasses and herbs. There’s quite a lot of evidence emerging that the eggs are nutritionally better, especially high in Omega 3 when the hens are fed on pasture.

There’s an article on pasture seed mixes for hens on the site. I’ll also be able to give them some comfrey in season along with bolted brassicas, lettuce etc. and some tray grown micro-greens and chickweed.

Leave a Comment Here on Preparing the New Poultry Plot