Home › Keeping Chickens › Rats and Other Vermin around Chickens

Rats and Other Vermin around Chickens 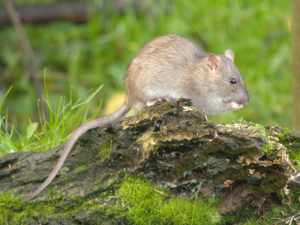 Having said that, rats have been known to attack and kill chicks and will take eggs.

Mice are not so much of a problem although they will happily eat chicken feed they are small and can be killed and eaten by the chickens. This tends to keep them away, just as the cat keeps out of the dog’s garden.

Preventing Rats and Vermin Around Chickens

If you’ve got chickens in your backyard or garden you really don’t want rats running about so you need to take some action to avoid attracting them.

The first thing is to keep the area clean. Apart from deterring rats, good hygiene will keep your poultry healthy and avoid unpleasant smells annoying people.

Don’t leave food lying around. If you overfeed your hens so that they leave grain and other foods at the end of the day the rats will appear to eat your hen’s left overs.

Be careful how you store you poultry feed. You may feel it is safe in a wooden shed but rats and mice can gnaw through wood quite easily to get a meal. Buy a storage bin, a plastic dustbin with a close fitting lid designed for outdoor use is ideal. Not only will it stop the rat from getting to the food, usually, but it will reduce the smell of the food that attracts them in the first place.

Collect eggs daily as soon after laying as possible as these are another food source for the rat.

Keeping rats out of the henhouse

As I said above, rats can gnaw through wood so they can actually gnaw through into the hen coop to get at the food inside. Keep an eye out for damage and take action immediately you notice them trying to get in. Rats are nocturnal and will be back each night to carry on the burglary.

Their teeth continually grow which is why they can chew through things you would not expect. They are also very sharp and ordinary chicken wire can be chewed through as if with wire cutters. Quality weld mesh around the run rather than wire will be far safer from the rat. If they are trying to gnaw through the house you can also staple weld mesh to the outside of the wood, however, if the problem is that severe you need to move on to control rather than simple deterrence.

Rats are great burrowers, they like to be safely concealed from aerial threats, so they can often get into your chicken’s run from underneath. To prevent rats from getting into the run you can bury the wire and even bend it outwards under the soil. Alternatively you can floor your run with weldmesh.

Controlling Rats – How to tell if you have rats

If you see signs of rats trying to get in to your chicken coop or damage caused by them you really need to control them. Remember rats are nocturnal and shy, they come out at night when nobody is around. If you see one in the day you can bet there are a lot more around nearby.

By controlling rats, I mean killing them – just to be clear. They are vermin and dangerous in that they carry disease. Most notably Weil’s disease which is potentially fatal. 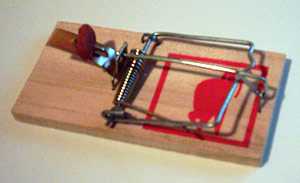 Traps can be effective with the right bait and are fairly safe for pets if positioned with care. It’s a bit unpleasant having to deal with the body but better than dealing with the live rat. They are usually a quick death and humane because of this.

Rat poisons are effective and proper dispensers and bait will make sure the rat will access the poison but not other animals. Having said that poisons are a danger to children, especially younger ones and you may well not want them around.

One old fashioned poison that is safe is cheap and easy to make yourself is to mix equal parts of corn meal and plaster of Paris and place it in the rat holes. The plaster of Paris hardens in the stomach of the rat causing death.